What is Cuk Converter?

The Cuk converter consists of more components compared to a buck, boost, and buck-boost converter i.e., two inductors, two capacitors, one diode, and one switch (MOSFET). The PWM pulses are given to the gate terminal of MOSFET to turn ON and OFF by which the output voltage is regulated.

In order to simplify and easily understand the working of the Cuk converter, the circuit operation is divided into four modes. Before starting the operation it should be noted that all the storage components in the circuit do not hold any charge in it.

Since there is no charge present in inductors and capacitors initially. When the MOSFET is turned ON, the source current starts flowing the inductor L1, MOSFET, and back to the source as shown in the below figure.

During this condition, the inductor current starts rising and it will store energy with polarity from positive to negative in the direction of current flow. Also, there is no flow of source current to the load in this mode.

Once the MOSFET is turned OFF, due to a sudden drop in current through the inductor, the polarity of the inductor will be reversed. Now the charged inductor L1 in the previous mode will start discharging in the reverse direction. Here in addition to the energy dissipating from the inductor, the current will flow from the source to the inductor.

The current flow path when the MOSFET is turned OFF is from the source to inductor L1, capacitor C1, diode, and back to the source as shown above. Similar to mode-1 no power is supplied to the load in this mode.

Simultaneously when the capacitor is discharging, inductor L2 will be charged with energy provided by the capacitor C1 as shown above. Due to flow reverse current, the diode will be in reverse bias and hence it remains in the OFF state in this mode.

Again when the MOSFET is turned OFF, mode-2 will be repeated in which capacitor C1 will be charged with inductor energy by forward biasing the diode. In addition to this, the charged inductor L2 in mode-3 will start discharging in the reverse direction through the same diode and transfers its energy to the load as shown below.

Therefore from the above four operation modes of the Cuk converter, we can conclude that. When the MOSFET is in the ON state, inductor L1 gets charged and capacitor C1 will supply its energy to load.

When the MOSFET is in the OFF state, capacitor C1 gets charged and inductor L2 supplies its energy to load. The capacitor C1 acts as the medium for transferring energy from source to load. The below shows the waveforms for voltages and currents. 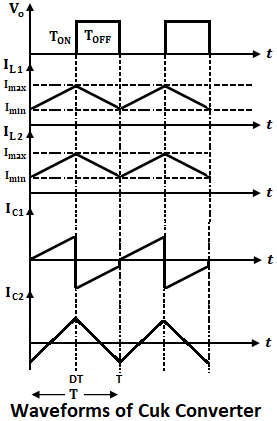