However, a dc chopper is a single-stage dc to dc converter unlike more than one stage i.e. converting dc to ac and then ac to dc. Thus a dc chopper is more efficient, smaller in size, and low in cost due to which it is mostly used in many applications.

DC choppers consist of semiconductor devices like thyristors, BJT, MOSFET, IGBT, etc, that act as the switch which connects and disconnects the supply to load at a rapid rate due to which the average dc voltage supplied to the load changes and thus a variable dc supply is obtained from a dc chopper.

A step-up chopper is similar to a step-up transformer whose output voltage is greater than the input supply voltage. The below shows the circuit configuration of the step-up chopper. 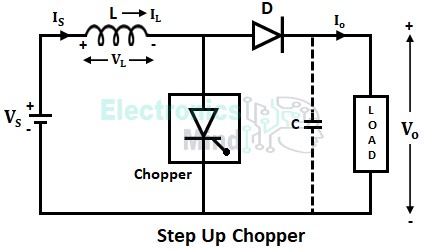 When chopper CH is ON, the supply current flows the path,

The inductor L stores energy in this state. The inductor chosen for this circuit is supposed to have a higher value of inductance L so as to reduce the ripples in the output voltage and also to obtain the continuous current. 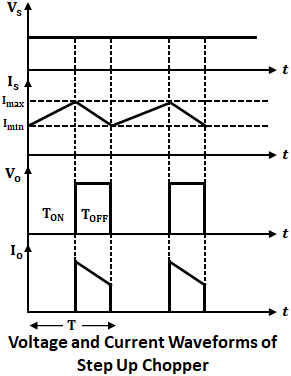 Now when the chopper is in the OFF state the voltage across the inductor will be difference of the average output voltage and supply voltage. The energy stored by the inductor is delivered to the load is,

Considering the system to be lossless, under steady state condition, we have, 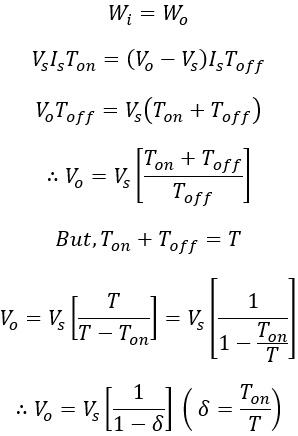 A step-up chopper is used in regulated dc power supplies and regenerative braking of dc motors. A capacitor is used in parallel with the load to ensure constant and continuous output voltage.