What is Zeta Converter?

Similar to other dc-to-dc converters, a zeta converter achieves a regulated output by exchanging energy between the capacitors and inductors. The amount of energy exchanged is controlled by a switch by changing its duty cycle. Let us see the circuit design and operation of a zeta converter.

The capacitor C1 acts as the bridge between the input and output sides of the converter. It also isolates input and output sides from each other. Generally, a transistor (MOSFET or IGBT or BJT) is used as the switch in dc-to-dc converters, due to low power loss, higher input impedance, and simple driver circuitry MOSFETs are mostly used.

The MOSFET switching is controlled by PWM pulses applied at the gate terminal and feedback taken from the output so that the desired regulated output will be obtained.

Initially, before starting the circuit operation, it is to be assumed that all the energy-storing components in the circuit i.e., inductors and capacitors, do not have any energy in them. To easily understand and simplify the working of the zeta converter, the operation of the circuit is divided into four modes.

When MOSFET is triggered by applying a voltage higher than the threshold voltage at the gate terminal. The source current start flowing through MOSFET, inductor L1, and back to the source as shown below.

During this state, the flow of current through the inductor L1 makes it charge. Thus inductor L1 will store energy supplied by the source with the polarity as shown above. No source current is supplied to the load in this mode.

When the MOSFET is turned OFF by removing its gate signal, the source current stops flowing through the inductor L1. Since an inductor doesn’t allow a sudden change in current through it, the polarity of the inductor gets reversed according to Lenz law i.e., positive becomes negative, and negative becomes positive.

Now the inductor L1 starts realizing its stored energy with reversed polarity. Due to this diode will be forward biased and it permits the flow of inductor current through it. Thus the energy from the inductor L1 will flow through the diode and to the capacitor C1 as shown below.

The series capacitor C1 starts charging by the energy supplied by inductor L1. Here we can notice how a capacitor gets charged by dc current, the current provided by the inductor is not constant dc which will be decreasing in nature. Thus energy from the inductor L1 gets transferred to capacitor C1.

Again when MOSFET is switched ON, the discharged inductor L1 gets charged by the source as seen in mode-1. Also in this state, the charged capacitor C1 in the previous mode starts discharging through inductor L2, load, source, and back to capacitor C1 as shown below.

The capacitor C1 will supply its energy to the inductor L2 and load. Thus the load gets power in this mode and inductor L2 gets charged. The diode will remain in OFF-state due to reverse voltage.

In this way, the MOSFET is turned ON and OFF at a regular interval by applying and removing gate signals so that a regulated dc power will be supplied to the load. From the above four operation modes of the zeta converter, we can say that, 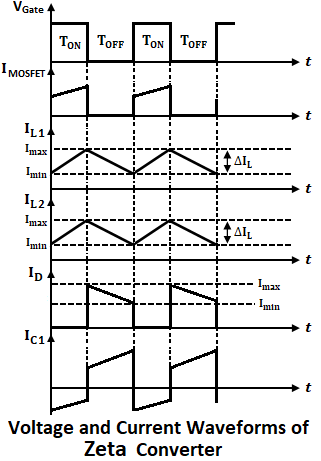