A chopper is basically a power semiconductor device used to obtain a desired dc voltage from an unregulated dc voltage source. The chopper circuit employs a thyristor that is turned ON and turned OFF at the required instant to get desired output. But the most undesirable feature of the thyristor is it cannot turn OFF by itself.

Thus, in order to turn OFF or commutate thyristor, there are some commutation circuits that are broadly classified into two groups,

In load commutation, the thyristor is turned OFF by reducing the current flowing through it to zero. This can be achieved either by load circuit parameters that bring thyristor current to zero or by diverting current flow away from the thyristor path.

In this technique, energy storage elements such as inductor and capacitor are connected additionally in the circuit. Using these external elements the forced commutation can be achieved in two ways,

In this article, let us learn about circuit construction and working of voltage commutation technique in chopper or voltage commutated chopper. This type of chopper circuit is also called impulse commutated or classical or parallel-capacitor turn OFF or oscillation chopper. 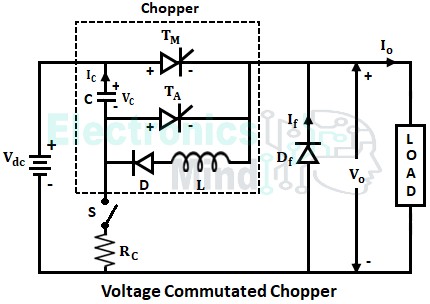 A freewheeling diode Df is connected across the load to freewheel the current due to load inductance. In the above circuit load current IO is assumed to be constant, and zero losses in thyristors and diodes.

To simplify the understanding of the operation of voltage commutated chopper, the entire operation is divided into four different modes. Before starting the chopper circuit, the capacitor C must be charged to positive source voltage Vdc with the upper plate as positive polarity and lower plate as negative polarity as shown in the above circuit.

The charging of capacitor can be done in either of the following two ways,

Now let us see the operation of the chopper in different modes.

In this mode of operation, the main thyristor TM is triggered at an instant of time t0, and thus the load is connected to the source. Now load voltage VO follows source voltage Vdc. 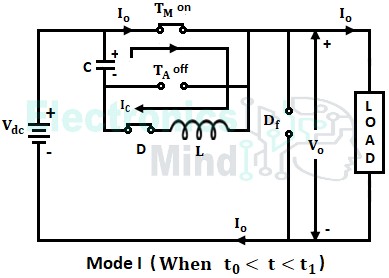 This mode ends at an instant t1 and the state of the circuit at the end of mode will be, 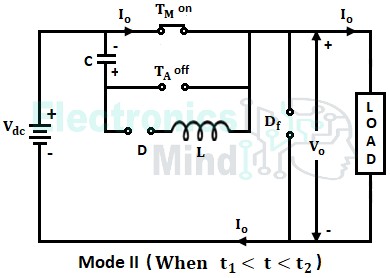 This mode starts at desired instant t2 when auxiliary thyristor TA is triggered. As TA is triggered, it starts conducting and the capacitor voltage to which it is charged i.e., -Vdc, appears across the main thyristor TM. 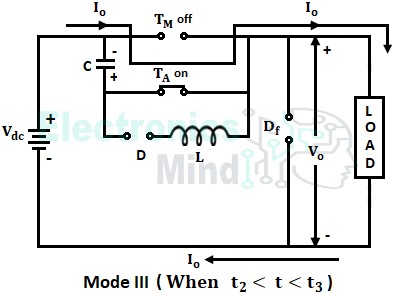 As VO decreases, the voltage across the capacitor also decreases. Then after VC charges linearly from -Vdc at t2 to Vdc at t3 since load current is assumed to be constant. At the end of this mode, the circuit state will be,

This mode is from instant t3 where VC = VTA = Vdc, VO = 0, and capacitor current becomes zero. Thus auxiliary thyristor TA is turned off naturally and capacitor C is charged to a higher value at t3. 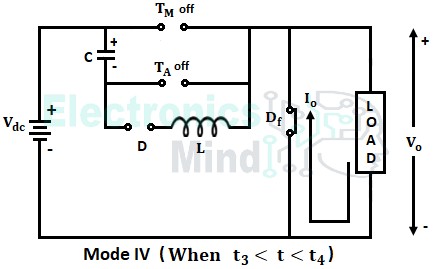 Due to slight overcharging of the capacitor, the freewheeling diode Df is forward biased and it conducts. As a result, the load current IO flows through the load and freewheeling diode as shown above. From t3 to t4, the voltage through the auxiliary thyristor becomes slightly negative since the capacitor is overcharged at t3. In this mode, the state of the circuit will be,

The below shows the related voltage and current waveforms for voltage commutated chopper. 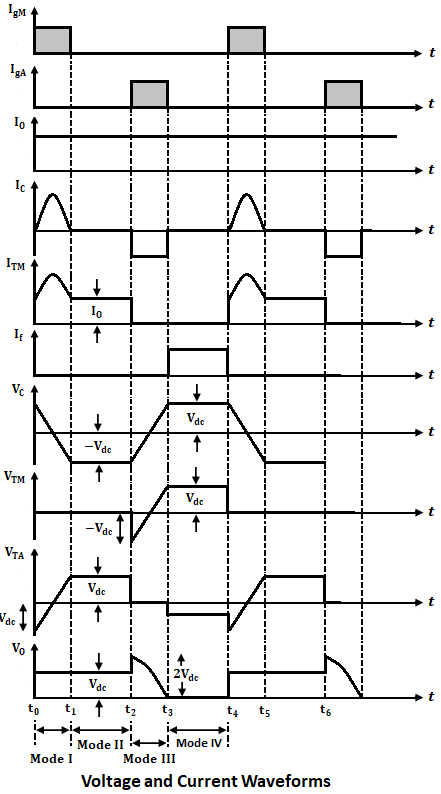 At instant t4 main thyristor is triggered again and the process described from t0 to t4 repeats again. Since the main thyristor is commutated by impressing a reverse voltage obtained from the charged capacitor, the circuit is said to be called Voltage Commutated Chopper.

Though the circuit configuration of voltage commutated chopper is simple. It suffers from the following drawbacks,