Many domestic, industrial, automobile, lighting, traction, and space applications require power from dc voltage sources. For better performance and smooth control over the process, the equipment must be fed from a variable dc voltage source i.e., conversion of dc voltage to different levels is required.

In this type of dc-to-dc conversion technique, two dc machines of similar ratings are used. In the two machines, one operates as the motor and the other as the generator. A fixed dc voltage is applied to the dc motor, the motor converts the dc supply into mechanical energy, and then the mechanical output from the dc motor is applied to the dc generator.

The dc generator converts the mechanical energy into electrical energy where the output will be a variable dc voltage. Since this type of conversion technique requires two machines, the whole system is bulky, costly, and less efficient.

In an ac link type dc-to-dc chopper, the available fixed dc voltage is converted into ac by using an inverter circuit. Then after the ac output from the inverter is fed to a transformer where the voltage is stepped up or stepped down according to the requirement.

In the whole operation of the above ac link chopper, we can see that it involves two stages where dc is converted into ac and ac is again converted into dc. However this type of conversion technique requires a high cost due to the requirement of a transformer, rectifier, and inverter circuit, it is inefficient due to multiple stages and the circuit becomes bulky.

A dc chopper is a semiconductor switch (ON-OFF switch) that connects and disconnects the dc supply to the load at a rapid rate to obtain variable dc voltage from a fixed dc voltage source.

Compared to ac link choppers, dc-to-dc conversion is directly done in dc choppers without any multiple stages. Thus a dc chopper can be considered as a dc equivalent of an ac transformer that can either step up or step down a fixed dc voltage source.

As dc choppers involve single-stage conversion they are more efficient, low in cost, have faster response, lower maintenance, and are smaller in size. Therefore dc choppers are widely used in most applications where there is a requirement for variable dc voltage supply.

The power semiconductor switches used in dc choppers are power BJT, power MOSFET, IGBT, GTO, or force-commutated thyristor. For low and medium power applications power MOSFET, IGBT or BJTs are used as the switches. Thyristor-based dc choppers are used in high-power applications, also this type of chopper circuit requires an additional commutation circuit. However, thyristors are not preferred nowadays due to the complexity of the circuit configuration.

We have seen that a dc chopper is simply an ON-OFF switch that connects and disconnects the dc supply to the load. The below figure shows the basic dc-to-dc chopper circuit which consists of a semiconductor switch connected between the dc supply (Vdc) and load (R). 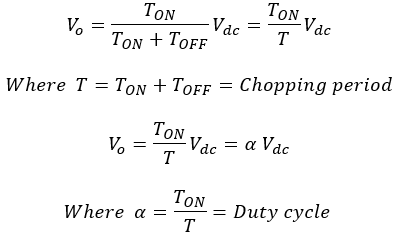 Here TON can vary from 0 to T, so 0 ≤ α ≤ 1. Thus output voltage Vo can be varied from 0 to Vdc. Since the output voltage obtained is lesser than the input voltage this type of chopper circuit is called a step-down chopper.

However, dc choppers can also produce an output voltage greater than the input voltage (i.e., Vo > Vdc). This type of dc chopper circuit is called a step-up chopper and is illustrated below.

The power supplied to the inductor when the switch is closed is given by,

Now when the switch is OFF, the power released by the inductor to the load is given by,

Considering no losses in the system, in the steady-state Wi = Wo. 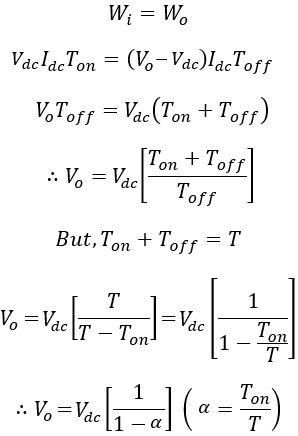 Here TON can vary from 0 to T, so 0 ≤ α ≤ 1. Thus output voltage Vo can be varied from Vdc to ∞, hence the output voltage obtained will be higher than the input voltage.

Generally, two techniques are used to control the output voltage of a dc chopper. They are,

In pulse-width modulation, the average output voltage is controlled by varying the ON period of the switch at a constant switching frequency (i.e., constant chopping period T = TON + TOFF).

In frequency modulation, the switching frequency is varied (i.e., chopping period T = TON + TOFF is varied) by varying either the turn-ON or turn-OFF period of the switch. But this technique generates harmonics at unpredictable frequencies due to which the filter design becomes complex. This method is generally used when a forced-commutated thyristor is used as the switch.

DC choppers are classified based on the value of output voltage, the direction of output voltage and current, and the commutation method used. The various types of dc chopper circuits are listed below.