A Step-down chopper is basically a high-speed semiconductor switch. The switch can either be a power BJT, power MOSFET, transistor, or SCR depending upon the voltage, current and switching rate required. With the help of the switch (i.e., chopper) the dc supply is connected and disconnected to the load very rapidly such that the average dc load voltage from the chopper will be less than the source voltage i.e., the output voltage of the chopper is stepped down.

Working of Step Down Chopper With R Load : 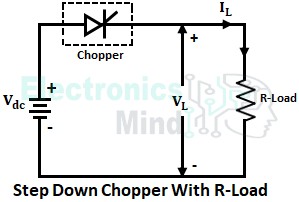 The voltage and current waveforms when the chopper is connected to a resistive load are shown below. 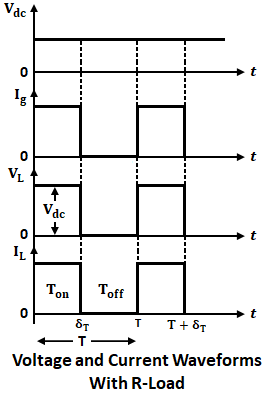 Working of Step Down Chopper With RL Load :

The circuit configuration for a step-down chopper with RL-load is shown in the below figure. 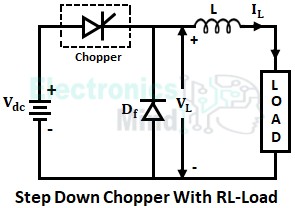 Generally, choppers are used to drive separately excited dc motors. The armature in the dc motor is represented by a combination of resistance and inductance. Hence, motors are considered as RL-load. For a step-down chopper, with RL-load, two modes are possible for the load current. They are,

If the value of the load inductance is very high, then the continuous load current is obtained. When the chopper is turned on for a period of 0 to δT, the RL load is connected in the circuit, load voltage VL follows source voltage Vdc the load current rises from its lower limit and reaches the maximum value at t = δT.

When the chopper is turned OFF for a period of δT to T, the load voltage becomes zero but the load current does not become zero due to the presence of load inductance. This is because an inductor doesn’t allow a sudden change in the current.

Thus once the chopper is turned OFF, the stored current in the load inductance free-wheels through the free-wheeling diode Df as shown above. Then after the load current decreases gradually and reaches its lower limit as shown in the below waveforms. 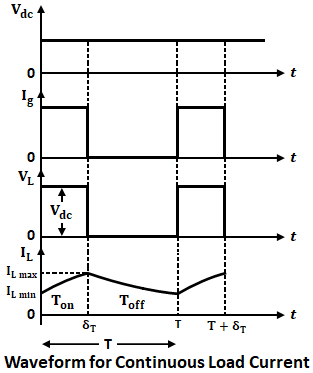 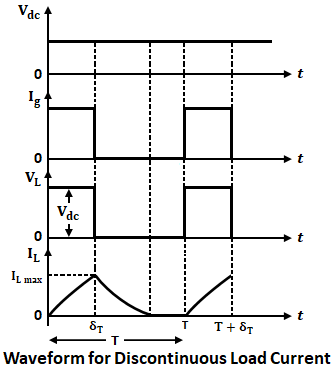 From the waveforms, we can see that the load voltage flows only during the turn ON period (TON) of the chopper. The average output voltage is given by, 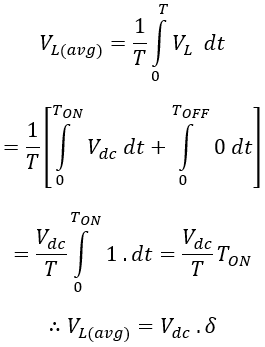 Where δ = TON/(TON + TOFF) = TON/T is known as duty cycle. Thus by varying the duty cycle (δ) from 0 to 1, we can obtain load voltage from 0 to Vdc. Hence the load voltage will be always less than the input voltage, thereby calling it a Step-Down Chopper.