The performance of both center-tapped and bridge rectifiers is almost identical, except the bridge configuration has the advantages of reduced peak inverse voltage across diodes and improved transformer utilization factor. In this article let us see the circuit diagram and operation of a single-phase full-wave bridge rectifier. 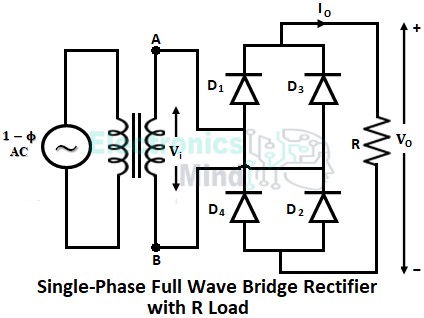 Thus, during the negative half-cycle conduction takes place from point B, through diode D3, the load resistance R, and diode D4, to point A as shown above in figure B. The load current will continue to flow through D3 and D4 until the next positive half-cycle starts.

Hence a dc voltage will appear across the load from an ac source. The below shows the waveforms for output voltage Vo, output current Io, and the voltage drop across diodes. 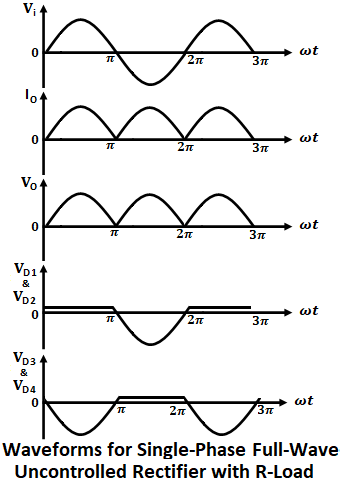 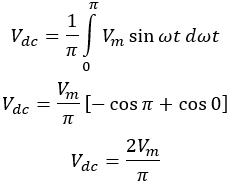 The output dc power is given by, 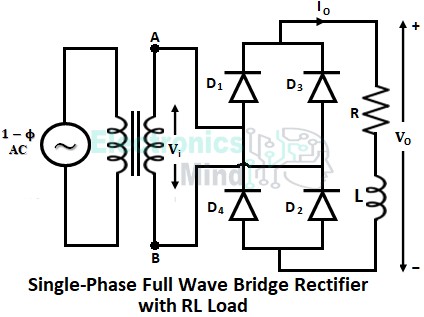 For an RL load, the average output voltage of the rectifier will be the same as in the case of resistive load, but the output current waveform changes and it becomes continuous (non-zero) depending upon the value of load inductance and load resistance. For a highly inductive load where L is much greater than R, the load current will be constant. The waveforms for output voltage and current with RL load are shown below.

The value of average output voltage and output current with RL load is given by,

Since a bridge rectifier eliminates most of the drawbacks of the center-tapped rectifier and can supply a large amount of dc power to the load. It is therefore used in most power electronics applications to convert ac power into dc power.