What is SEPIC Converter?

SEPIC stands for single-ended primary-inductor converter. SEPIC is basically a type of dc-to-dc converter which allows a range of dc voltage at its input side and gives a stable voltage at the output side. This type of converter is quite similar to buck-boost and Cuk converters which provide an output voltage greater than, less than, or equal to its input voltage.

The schematic diagram of a basic single-ended primary-inductor converter (SEPIC) is shown in the below figure. Similar to buck-boost and Cuk converters SEPIC converter also uses inductors and capacitors in order to obtain the regulated output.

The circuit consists of two inductors, two capacitors, and two static switches. Static switches are basically semiconductor devices in which one will be a diode and another will be typically a transistor (MOSFET or IGBT or BJT). The diode will be an uncontrolled switch that will turn ON and OFF automatically depending upon the voltage across it.

Due to higher input impedance and lower voltage drop, MOSFET is preferred over IGBT and BJT in most of the dc-to-dc converters. MOSFET will be controlled by controlling the gate terminal using PWM signals.

When the MOSFET is switched ON by applying gate pulse, the source current starts flowing through the inductor L1, MOSFET, and back to the source as shown below. This causes the inductor’s current IL1 to increase and thus inductor will start charging from the input source.

Now once the MOSFET is turned OFF by removing the gate pulse, the inductor L1 doesn’t allow a sudden change in current and the polarity of the inductor reverses according to the Lenz law. Thus the inductor will start discharging in the reverse direction and supplies its energy to the capacitor C1 as shown below.

The capacitor C1 which was discharged when MOSFET is turned ON will be charged by inductor L1. Consequently, the charged inductor L2 will also start discharging in the reverse direction due to which the diode gets forward biased, and the energy dissipated from the inductor L2 will be transferred to the load.

Again when the MOSFET is switched ON, the cycle again repeats i.e., the inductors L1 and L2 will be charged by source and capacitor C1 respectively. The SEPIC converter can be operated either in discontinuous conduction mode or continuous conduction mode depending upon whether the current through either of the inductors is made to fall to zero or not. The below shows the current and voltage waveforms. 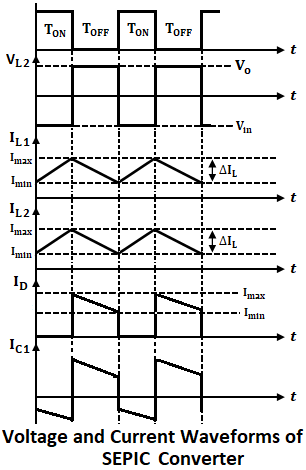