The figure below shows the power circuit of the Morgan chopper in which T1 is the main thyristor, and the elements, capacitor (C), saturable reactor (SR), and diode (D) form the commutating circuit of the chopper. 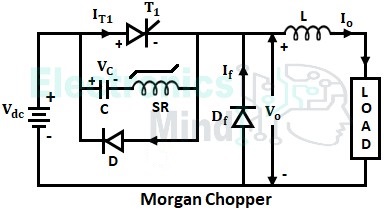 The operation of the morgan chopper can be understood by three different modes.

When the main SCR, T1 is OFF, capacitor C will charge to the supply voltage Vdc and the saturable reactor is placed in the positive saturation condition. The capacitor charging path will Vdc+ → C → SR → L → Load → Vdc– as shown below. 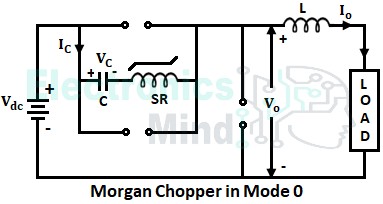 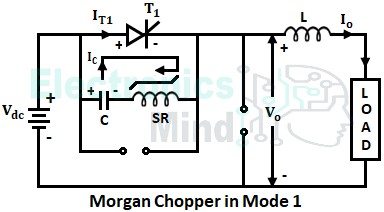 This forms a resonating circuit with a discharge time of π √LsC seconds, where Ls is the post saturation inductance of SR. Due to a small discharging time, the polarities of the capacitor will be reversed very quickly i.e., it is negatively charged with the right plat as positive polarity and the left as negative polarity.

As soon as the core flux in the saturable reactor is driven into positive saturation from negative saturation, the capacitor starts discharging through the path C+ → SR → T1 → C–. Due to this, a reverse current is applied to the thyristor, T1. When the discharge current exceeds the forward current of T1, it is turned OFF and then the discharge current starts flowing through the diode D as shown below. 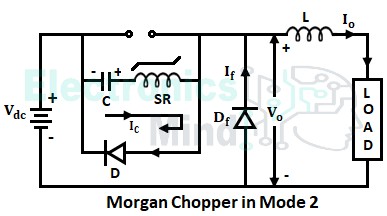 As soon as the T1 is turned OFF, the load voltage falls to zero. But as the load inductor L opposes the sudden changes in the current, it starts releasing the energy stored by inducing an emf of reverse polarity. Hence the load current Io flows through the freewheeling diode Df.

In the whole operation, the load current from the source is given through T1. But once T1 is turned OFF the current due to inductive load begins to flow through Df and this state is continued until T1 is triggered again. The below shows the associated current and voltage waveform in which T1 is triggered at instant t1 and turned OFF at t2, from t2 to t3 freewheeling diode will conduct. 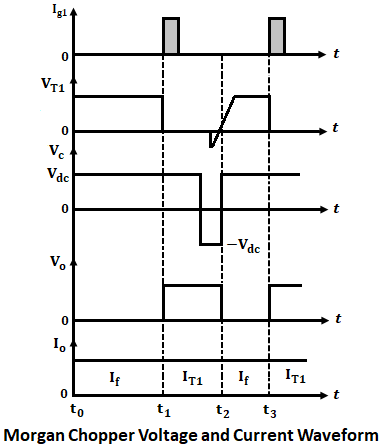