A chopper is used to obtain controlled dc output from an unregulated or fixed dc input with minimal power loss. It is a solid-state switching device that uses thyristors, BJT, MOSFET. In this article let us see how controllable dc output voltage is obtained from a chopper. The average load voltage VL in a chopper is given by,

In this method, load voltage VL is controlled by maintaining frequency constant. As the frequency is kept constant, the time period also remains constant; whereas, the ON time (Ton) of the chopper is varied. As Ton is varied, the width of the pulses is varied, and hence constant frequency system is also known as “Pulse-width Modulation (PWM) Control”. The waveforms for VL with constant frequency for different duty cycles are shown below. 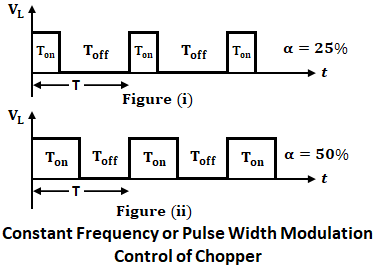 As shown in the above waveforms, the total time period (T) of the chopper is maintained constant; whereas, Ton is varied. In figure (i), Ton is 25% of T and in figure (ii), Ton is 50% of T. In this way, a chopper output voltage is produced and VL can be controlled.

Since frequency is varied, the variable frequency system is also known as “Frequency Modulation Control”. The below figure shows the frequency modulation control, with constant Ton and Toff is varied from 75% of T to 50% of T. 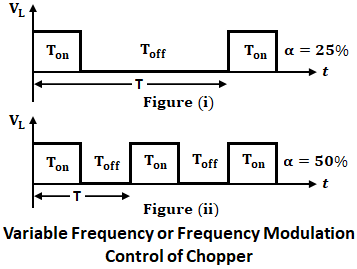 The below figure shows the frequency modulation control, with constant Toff and Ton is varied from 25% of T to 50% of T. 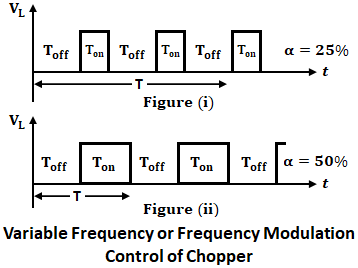 Therefore, most of the choppers employes pulse width modulation control over frequency modulation.

In this control technique, the output voltage is controlled by maintaining the load current between maximum Imax and minimum Imin value by switching ON and OFF the chopper. This method is also known as two-level control. In this method, the current is always continuous. 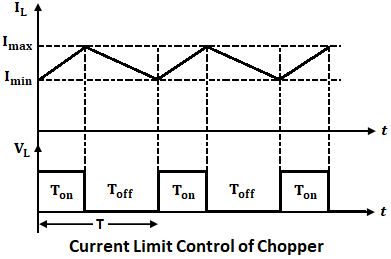