Depending upon commutation circuits i.e., some external means that are needed to forcefully turn OFF the thyristor. The inverter circuits are classified broadly as,

In the above circuit diagram, the commutating circuit of the thyristors is not shown for simplicity. Assume that on removing gate pulses to the thyristors they are turned OFF. The full-bridge inverter operates in two modes in one cycle of ac voltage at the output side.

The thyristor pair T3, T4 conducts until thyristor pair T1, T2 have triggered again at t = T, and the cycle repeats. The below shows the waveforms of gating signals, output voltage, and currents of thyristors and diodes. Since load is assumed to be purely resistive, the load current will be equal to load voltage. 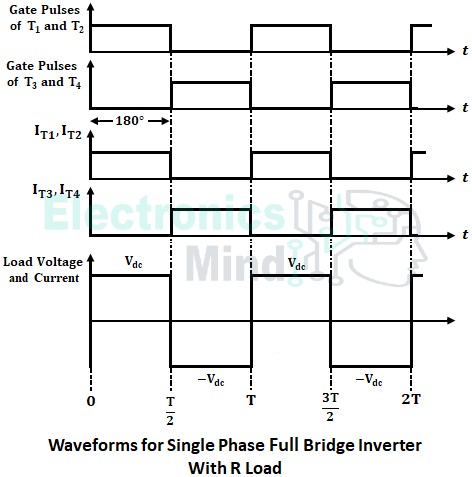 Compare to the circuit diagram with resistive load, in this circuit, two extra diode pairs (D1, D2, and D3, D4) are used. The four diodes are connected in anti-parallel to the four thyristors. The purpose of diodes is discussed below in working.

The operation of a full-bridge inverter with RL load can be better understood by considering four modes,

At t = t5 the load current due to inductance becomes zero and thyristors T1, T2 will start conducting. From t5 the cycle repeats i.e., the whole operation from mode-I to mode-IV will repeat. The waveforms of load current and voltage with RL load are shown below. 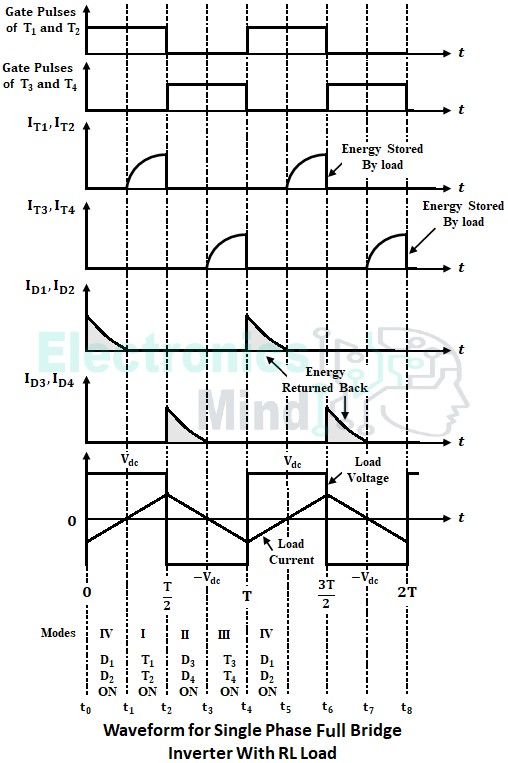 From the above waveforms, when an inductive load is connected to the inverter, the load current lags behind the load voltage. The function of diodes is to feed the reactive power back to the source provided the load is inductive. These diodes are called fed back diodes. However, if the load is purely resistive reactive power will be zero and hence the need for diodes is eliminated.

Care must be taken to see that the thyristors present in the same branch of the full-bridge inverter do not conduct together. If both the thyristors are triggered simultaneously, it leads to a severe short-circuiting to the source.

Compare to half-bridge inverters, full-bridge have the following advantages,