Parallel inverters are well suited for low-frequency applications up to 100kHz. This type of inverter uses load commutation or self-commutation in which a capacitor is connected across the load so that the overall load circuit is underdamped. This inverter produces square wave output voltage from a dc power input. Let us see the circuit diagram, working, and waveforms of a basic parallel inverter.

The circuit consists of two thyristors (T1 and T2), a center-tapped transformer, a commutating capacitor (C), and an inductor (L). The load is connected to the secondary of the transformer. The dc power input is given between center tap primary and common cathode through thyristors as shown below. 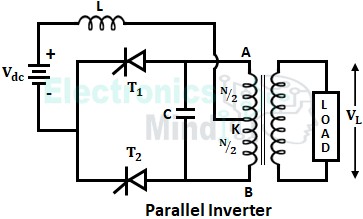 The capacitor appears to be in parallel with the load through the transformer due to which the inductor is connected in series with the dc source. Hence, during the commutation of the thyristor, the instant discharging of the capacitor through the source is prevented.

The principle of operation of parallel inverter is that the two thyristors are turned ON alternatively at equal time intervals, so that, the two halves of the transformer primary will induces an alternating voltage in the secondary. The circuit operation can be better understood in different modes of operation. 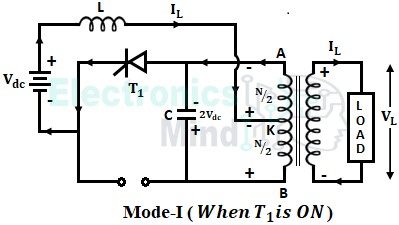 With the end of mode I, mode-II begins and once the thyristor T2 is triggered, T1 is reversed biased with respect to the voltage across the capacitor C, i.e., a voltage equal to -2Vdc appears across thyristor T1. 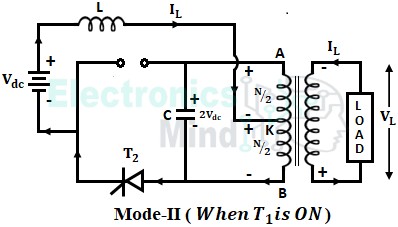 So, T1 gets commutated when this reverse voltage is applied for a sufficient time. Now, thyristor T2 alone will be in conduction and the load current flows through inductor L and thyristor T2 as shown above. During this, a voltage equal to 2Vdc appears across the primary of the transformer and across the capacitor with reverse polarities.

This mode begins when the thyristor T1 is triggered again. Now, due to the conduction of T1, the thyristor T2 is reversed biased with respect to the voltage of the commutating capacitor i.e., a voltage equal to -2Vdc appears across thyristor T2. When this voltage is applied for a sufficient time thyristor T2 gets commutated and the whole process will be repeated.

When the triggering pulses are periodically applied to the thyristors alternately, the voltage waveform obtained across the output terminal of the transformer will be approximately rectangular. Hence, the output voltage in a parallel inverter is not a pure sinusoidal wave. The voltage and current waveforms for the parallel inverter circuit are shown below. 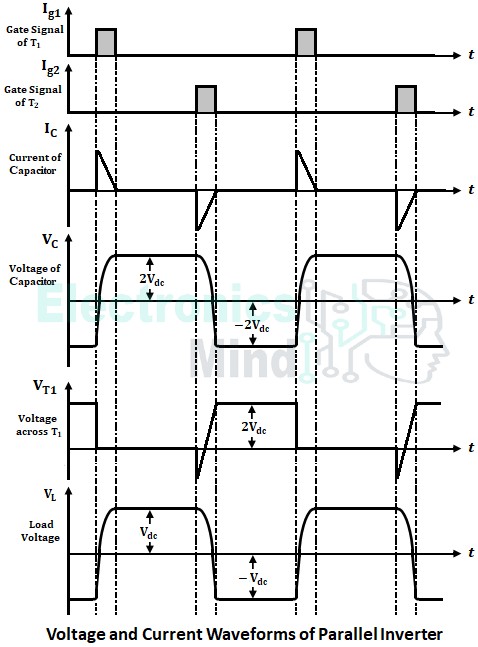 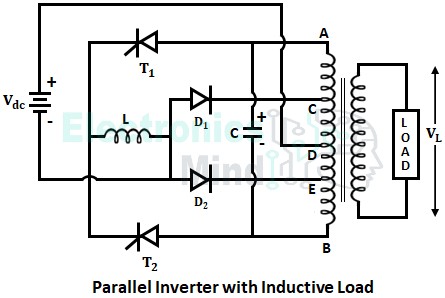