An inverter is basically a converter circuit that converts dc power into ac power. The alternating output voltage obtained from a dc power with the help of inverters can be fixed at a fixed or variable frequency. In order to obtain ac power from a dc power, inverters incorporate semiconductor devices like thyristors, BJTs, MOSFETs, IGBTs. Based on the connection of thyristors and commutating components, inverters are classified into three groups,

The circuit diagram of a single-phase half-bridge inverter with resistive load is shown in the below figure. The input to the inverter is given from a split dc power supply i.e., from a three-wire dc power supply. The components T1 and T2 are gate-triggered thyristors that produce positive and negative half cycles of the ac power at the output side. 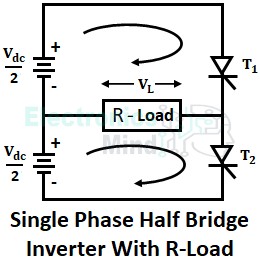 Working of Single Phase Half Bridge Inverter with R Load :

The working of the half-bridge inverter is divided into two periods,

Where T = (1/frequency of the output wave). The circuit operation should be in such a way that both the thyristors should not conduct at the same time. The below shows the waveforms of output voltage and thyristors gate currents. Since load is assumed to be resistive the output current waveform will be equal to the output voltage waveform. 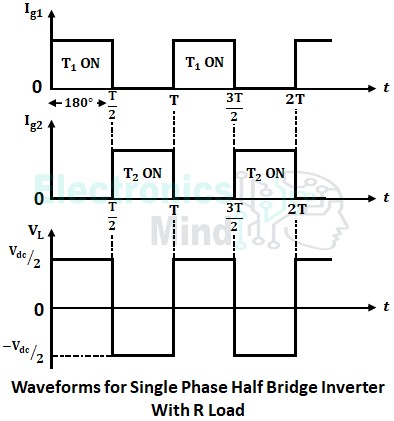 During the interval between 0 and T/2 (i.e., for 0 ≤ t ≤ T/2), thyristor T1 is triggered, and the instantaneous voltage across the load will be Vdc/2. At the instant t = T/2, the triggering pulses are removed for thyristor T1 due to which it is turned OFF (for simplicity commutation circuit of thyristors is not shown and is assumed to be turned OFF when triggering pulse is removed).

The triggering pulses applied for both the thyristors differ in phase by 180°. The frequency of the output wave is given by 1/T. By changing the value of T, the frequency, as well as the magnitude of output voltage, can be controlled. 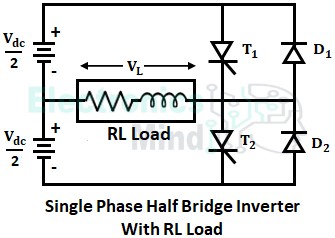 The load current will maintain its direction even after turning OFF the thyristor T1. This is due to the inductive load and this inductive load will develop a negative induced voltage which in turn makes the diode D2 to forward biases. Thus, the energy stored by the load is now fed back to the source through the lower half of the supply and diode D2 as shown below. 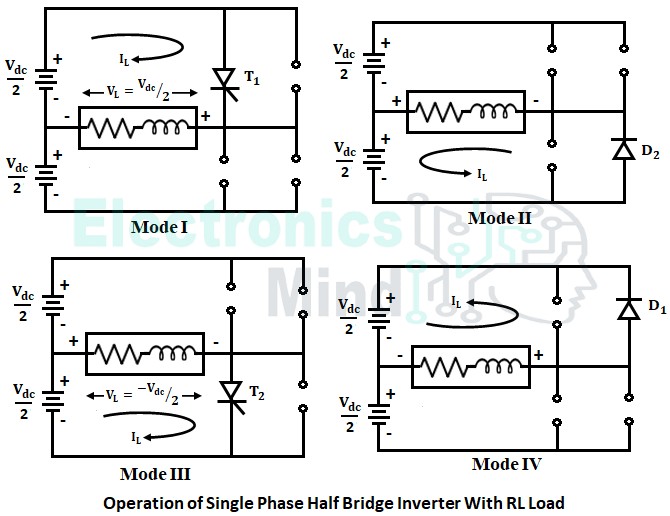 The negative load current maintains its direction even after turning OFF the thyristor T2. This is due to the inductive load and this inductive load will now develop a positive induced voltage which in turn makes the load current flows through the upper half of the supply and diode D1. Thus, the energy stored by the load is now fed back to the source and the load voltage changes its polarity.

In this way, positive and negative half-cycles are produced at the load side, and the whole operation repeats again and again. The below shows the waveforms of load voltage, load current, thyristors currents IT1 and TT2, and diode currents ID1 and ID2. 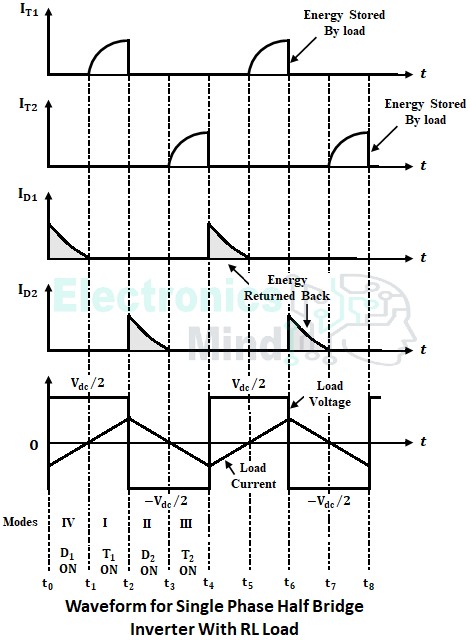 Therefore, when an inductive load is connected to the inverter. The load current lags behind the load voltage. In order to provide a path for load current when thyristors are turned OFF, diodes are connected in anti-parallel with the thyristor. Thus stored energy due to inductive load is fed back to the dc source through diodes and hence they are called Fed back Diodes. However, if the inverter is connected to a purely resistive load, the reactive power will be zero and hence there is no need for diodes.

Disadvantages of Half Bridge Inverter :

These limitations can be overcome by using a full-bridge inverter.