An inverter is a device used to obtain ac power of desired voltage and frequency from a dc power. The inverters achieve this by using thyristors with forced commutation or other semiconductor devices like BJT, MOSFET, IGBT, etc. According to circuit configuration, inverters are classified into three broad categories,

In this article, let us learn about the circuit diagram and operation of a series inverter.

What is Series Inverter?

The basic circuit of a series inverter is shown below. In the below figure inductor (L) and capacitor (C) are commutating components, T1 and T2 are two thyristors that conduct for positive and negative half-cycles of load current. 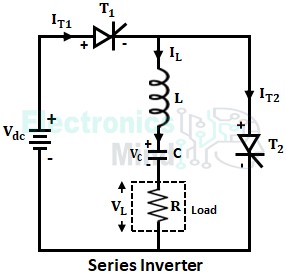 In a series inverter, values of the inductor (L) and capacitor (C) are chosen in such a way that the series RLC circuit should be underdamped since oscillations are possible in an underdamped circuit only. For an RLC circuit to be underdamped, the condition R2 < (4L/C) must be satisfied.

The operation of a series inverter can be understood through three modes.

Mode I starts when thyristor T1 is triggered at instant t = t0 by applying gate pulses to it. As T1 is triggered, it starts conducting and the load current flows through the path Vdc+ → T1 → L → C → R → Vdc– as shown below. 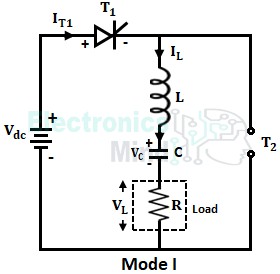 Initially, the capacitor is charged to a negative voltage -VC, but once T1 is triggered capacitor starts charging to positive voltage with upper plate positive and lower plate negative as shown above. As the current increases and reaches its positive maximum value, the voltage across the capacitor becomes equal to supply voltage Vdc.

Now, the current starts decreasing after reaching its positive maximum value but the voltage across the capacitor does not decrease. Instead of decreasing it increases further and reaches a value higher than Vdc, and the capacitor retains this voltage for some time.

At t = t2, thyristor T1 is turned OFF when the current reaches zero by natural commutation, but still, the capacitor holds the voltage (VC + Vdc) in it.

This mode starts from instant t2 when thyristor T1 is commutated and it remains in OFF state for a sufficient period of time (t2 to t3) as shown in the below waveforms. Hence, in this mode, both the thyristors T1 and T2 are in OFF-state and the capacitor voltage is maintained at a constant value of (VC + Vdc), and the load current IL remains zero in this mode i.e., from t2 to t3. 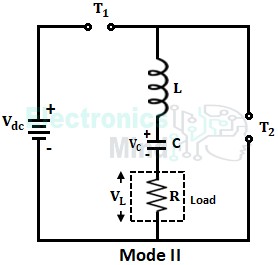 In this mode of operation, thyristor T2 is triggered at instant t3 since the positive polarity of the capacitor appears across the anode of T2 and it starts conducting. As thyristor T2 conducts, the load current starts flowing in the negative direction through the path C+ → L → T2 → R → C– as shown below. 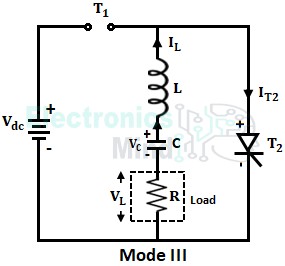 Now, the capacitor starts discharging and the load current IL flows in the reverse direction and reaches its negative maximum value. Then, load current starts decreasing and becomes zero at t3, due to this thyristor T2 gets turned OFF at t3. Then after capacitor again charges to negative voltage -VC as shown in the waveform. Again, after maintaining a certain amount of time delay, thyristor T1 is triggered and the cycle repeats. 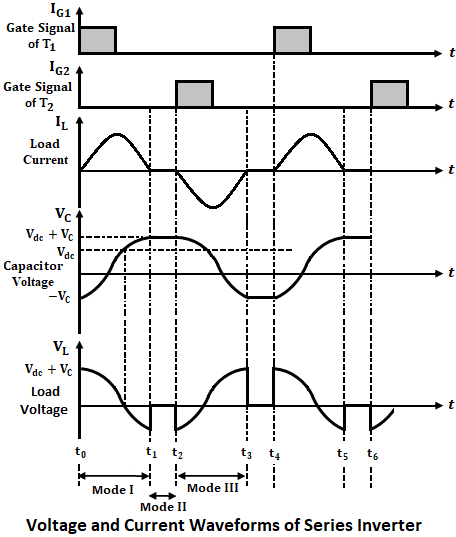 In the above waveforms, we can observe that the positive half-cycle of the load current is exactly equal to the negative half-cycle of load current since the capacitor stores charge during one half-cycle and releases the equal charge in the next half-cycle. But in practice, the output voltage wave of a series inverter is not a pure sine wave and distortions are present in it.

The following are the limitations of a series inverter, 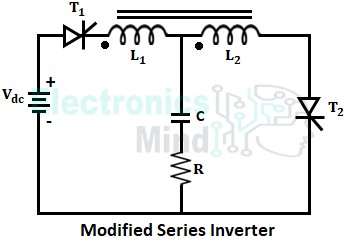 When T1 is triggered, an equal voltage will be induced in both the inductors L1 and L2 being closely coupled and capacitor charges. The capacitor voltage will add up to the voltage induced in L2 and maintain reverse bias of the thyristor T2.

If suppose T2 is triggered during conduction of T1, a reverse voltage will be induced in inductor L1. Due to this reverse voltage, T1 gets reverse bais and is turned OFF. Thus in a modified series inverter the output frequency range of the inverter can be increased higher than the oscillating frequency of the RLC circuit.