In the circuit shown above,

In this firing circuit, variable resistor R2 is used to control the pedestal voltage Vps, R2 acts as the potential divider. By adjusting the potentiometer R2, such that Vps is less than the threshold value of UJT (i.e., ηVz), the capacitor then starts charging through RV. When the capacitor voltage VC equals threshold voltage UJT is turned ON and pulse voltage is given to thyristors T1 and T2.

Charging of capacitor is done through Rv and diode D. If the value of Vps is less, then capacitor takes more time to reach threshold voltage and hence the firing angle delay occurs which makes output voltage less. Hence, it can be concluded that output voltage is directly proportional to Vps.

Time taken for the capacitor to charge from Vps to ηVz, can be derived as follows, 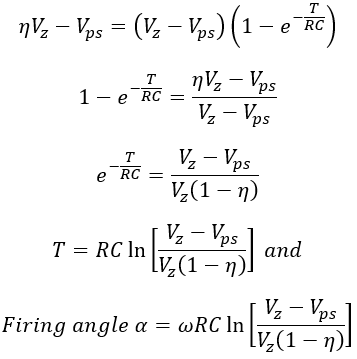 Where ω is the input frequency and η is the intrinsic stand-off ratio of UJT.