Conditions for Triggering or Firing Circuits of Thyristors :

Certain conditions are to be met for firing the thyristors are,

The general layout for firing the thyristor is shown below. 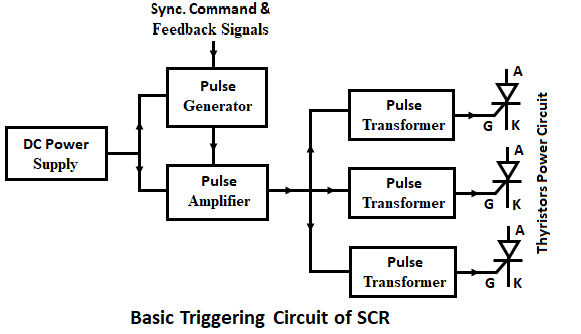 Triggering or Firing Circuits of Thyristor or SCR :

The most commonly used firing or firing circuits for thyristor or SCR are, 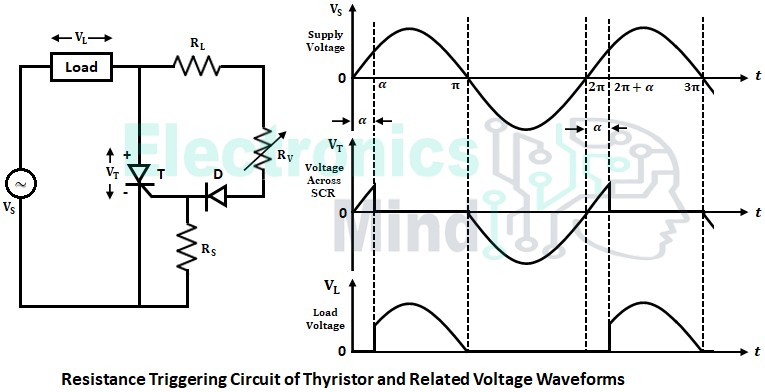 The working of the resistance firing circuit is as follows,

From the waveforms above, the firing angle and the output voltage can be controlled by varying the variable resistance RV. If RV is large, then the current will be small, and hence firing angle (α) increases and vice versa.

The diode D1 prevents the breakdown of the gate-cathode junction during the negative half-cycle. For power frequencies, the value of RV C for zero output voltage is empirically given by, 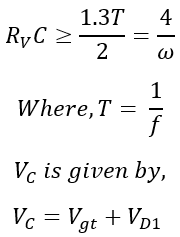 The maximum value of variable resistance RV is given by, 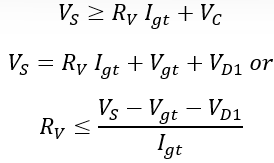 If the value of RV is high, then the capacitor takes more time to charge. Hence the firing angle is more but the average output is low and vice-versa. In order to have more output, the value of RV should be less.

The below figures illustrates the RC full-wave firing circuit.

Initially, the capacitor starts charging from zero voltage, and this low voltage is achieved by the clamping action of the SCR gate. When VC reaches Vgt, SCR is turned-ON and ac line voltage which is rectified into dc by a full-wave diode bridge appears across the load. In this circuit, RVC and RV are given by,

The above discussed R-firing and RC-firing circuits produce continuous gate pulses due to which there will be quite high power dissipation at the gate circuit of the thyristor. This power dissipation in the gate circuit can be reduced by using a UJT in the firing circuit. The UJT will work as a relaxation oscillator that produces sharp repetitive pulses with good rise time, and it also has good frequency stability under voltage fluctuations and temperature variations.

Thus whenever UJT conducts it produces pulses at the gate terminal of the thyristor as shown in the waveform. The capacitor charging time depends upon the value of variable resistance RV. Therefore, by varying the value of RV the firing angle can be varied.