The SCR (silicon-controlled rectifier) is a power semiconductor device belonging to the thyristor family. It is similar to a diode that allows the flow of current only in one direction. The major difference between SCR and diode is, the SCR has a built-in feature to switch ON and OFF of the power flow. An additional input signal called gate signal is given to the SCR to control its conduction. Thus by controlling the gate signal we can control the power delivered to the load.

SCR can be used in controlled rectifiers, inverters, choppers, cyclo converters, switching circuits, etc. They are available from a range of a few voltages to several kilovolts and can handle power up to 10MW.

It is basically a four-layered, three junction, and three-terminal device. The four layers are pnpn, the three junctions are namely J1, J2, and J3, and the three terminals are anode (A), cathode (K), and gate (G). The below shows the construction and symbol of silicon controlled rectifier.

V-I Characteristics or Modes of Operation of SCR : 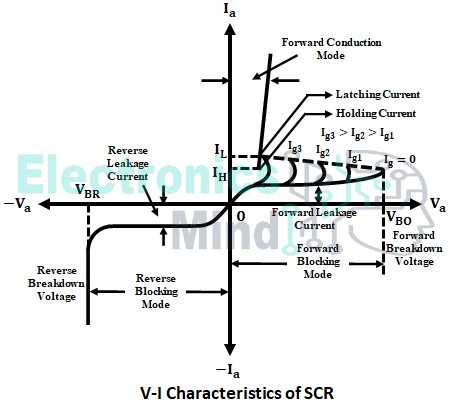 The V-I characteristics basically consist of three regions or modes of operation, they are

The reverse-biased junctions (J1 and J3) act as an open-circuit and the forward-biased junction (J2) acts as a short circuit, as shown above. It can be seen that the SCR does not conduct any current and it is said to be in the reverse blocking state or OFF state. However, a very small amount of leakage current flows through it.

Now, if we increase the reverse voltage to a value called reverse breakdown voltage, then an avalanche will occur and breaks the junction J1 and J3. Due to this a very huge amount of current flows through the circuit and hence the SCR starts conducting.

But this method of conducting SCR is not recommended as it may damage the SCR or the circuit in which it is working. Hence, we must ensure that the reverse voltage does not exceed the reverse breakdown voltage VBR.

The forward biased junctions (J1 and J3) acts as short-circuit whereas the reverse-biased junction J2 acts as an open circuit, as shown in the above figure. Even in this mode, the SCR does not conduct any current except a very small value of leakage current. This mode of operation of SCR is called forward blocking mode and it is the most wide operated mode.

Just as in the reverse blocking mode, the SCR can be made to conduct in the forward blocking mode by increasing the anode-cathode voltage to a value called forward breakdown voltage VBO. Even this method is also not recommended as it may also damage the SCR. Hence, the SCR does not conduct even in this mode and is treated as an open switch.

This method of conducting the SCR is most efficient, as it requires a voltage that is very much less than VBO. The only extra thing we require is a gate signal for a small period of time for which the anode current becomes equal to the latching current. The minimum value of anode current is compulsory in order to maintain conduction.

Once the anode current attains this value, the gate loses control and hence can be removed. The removal of the gate signal will not have any effect on the SCR conduction.

It is the voltage above which the SCR starts conducting i.e., ON state. The forward breakdown voltage depends upon gate current. The typical value of VBO lies between 50V to 2500V.

In other words, for the proper turn ON of SCR, the anode current must build up rapidly such that, the latching current of SCR is reached before the removal of the gate pulse.

Holding current is the minimum value of anode current below which the SCR will be in an OFF state. For an anode current of IH and above IH, it holds the SCR in ON state. It is useful to decide the instant for the application of the reverse voltage to completely turn OFF the SCR.

The reverse voltage above which the breakdown of SCR takes place i.e., the breakdown of junctions J1 and J3. It is also called the avalanche breakdown voltage. The VBR is less than the VBO with a typical value of a few kilovolts.