A unijunction transistor (UJT) does not belong to the thyristor’s family. It has a fast switching action. The conventional UJT is made up of an N-type silicon base with terminals B1 and B2, to which is alloyed a P-type emitter with terminal E, as shown in the below figure. 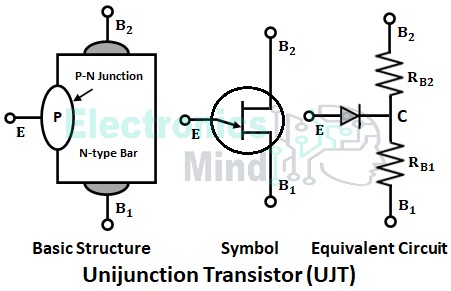 With positive voltage, Vb applied between B2 and B1, the potential of point C will be ηVb. Where η is referred to as the intrinsic stand-off ratio which is determined by the relative magnitudes of the internal resistances RB1 and RB2 of the top (base 2) and bottom (base 1) regions of the device respectively.

When UJT is turned ON, the resistance between the emitter and base-1 becomes low and the emitter current will be limited primarily by the series resistance of the emitter to base-1 external circuit.

To fire the SCR, a short-time current pulse at its gate is to be applied. The delay of firing and controlling the instant at which the pulse occurs within each half cycle is to be provided by the firing circuit. A UJT can be used to perform this function as shown in the below figure. 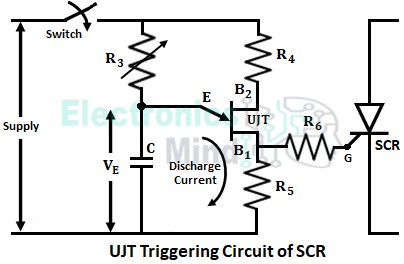 The spike of current occurring with the capacitor discharge is observed as a voltage spike developed across base resistance R5, part of this current is applied to the gate of the SCR. The duration of the firing pulse can be varied by adjusting the discharge rate of the capacitor through R5. 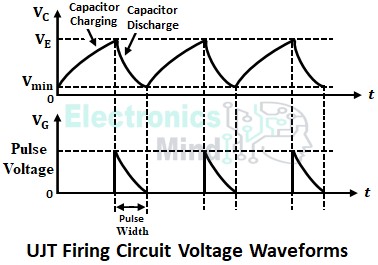 The switching speed of UJT determines the rise time of the triggering pulse. Discharge of capacitor C is accompanied by a decrease in voltage VE till UJT stops conduction for values of VE below Vmin. The capacitor will again start charging and the circuit is ready for the next operation.

The capacitor can be made to discharge through a pulse transformer which isolates the gate circuit of SCR from the power circuit. The secondary of the pulse transformer will be given to SCR, which supplies the firing pulse to the SCR.