A silicon-controlled rectifier (SCR) is the most widely used power electronic device belonging to the thyristor family. It is a semiconductor device with three terminals and four alternate layers of diffused P-type and N-type silicon. Unlike a transistor which can be used as a switch and amplifier, an SCR is a switch used in ac power control applications. 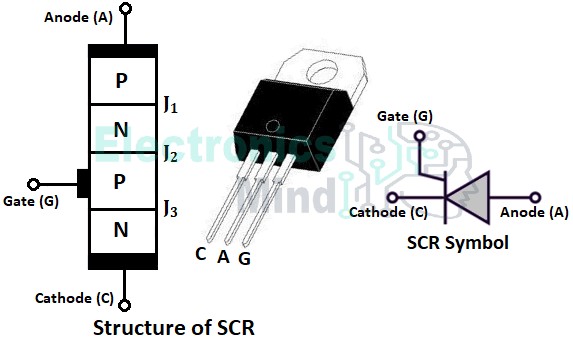 Turn ON Methods of SCR or Thyristor :

In reverse blocking mode, the anode is connected to the negative and the cathode to the positive terminal with the gate terminal open. Due to this, junctions, J1 and J3 are reverse biased and J2 is forward biased.

An SCR or thyristor can be turned ON by switching it from the forward blocking mode to forward conduction mode with the following methods, 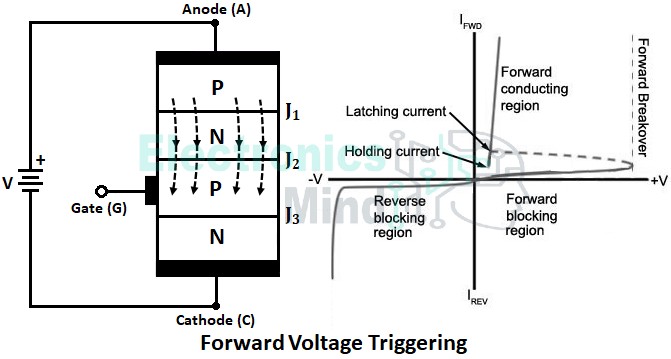 When anode-cathode voltage is increased to a value called forward break over voltage, avalanche breakdown occurs at junction J2 which in turn results in the breakdown of junction J2. When J2 breakdowns huge current starts flowing from anode to cathode and the device turns ON.

However, due to an increase in anode-cathode voltage beyond break down voltage the device gets damaged and continues to conduct even though voltage is reduced below break down voltage. The continuous flow of huge current at high voltage may destroy the PN junction due to overheating. Thus this method of turning ON the SCR is never recommended and it is never used in practice.

This type of triggering is used by a special class of SCR called light-activated SCR (LASCR). When the beam of light of a certain wavelength and frequency is made to fall on the hole of the inner P-layer. The free charge carriers will be injected into junction J2 and it will be forward biased. Hence the thyristor gets turned ON. The below shows the structure of LASCR.

In the forward blocking mode, junctions J1 and J3 are forward biased and hence act as a short circuit. Whereas junction J2 will be reverse biased which acts as the open circuit. Due to this, the applied voltage will appear across the open terminals of junction J2 with some leakage current.

When this junction temperature increases, there are more electron-hole pairs and hence the leakage current increases thereby turning ON the SCR at some temperature. This type of turn-ON may cause a thermal runway and the device may get damaged. Therefore this method of turning ON the SCR is also not used in practice.

We know that in forward blocking mode junctions J1 and J3 are forward biased and J2 will be reversed biased. In this condition, the reverse biased junction J2 will act as the capacitor since opposite polarity carriers will be accumulated at two terminals of the junction J2 due to the presence of free space. 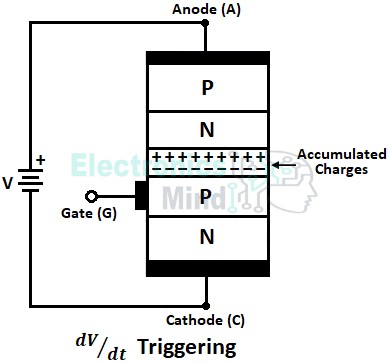 Hence the leakage current through the junction is nothing but the capacitor current given by the formula,

Where dV/dt is the change of voltage over the change of time and C is the junction capacitance. From the above equation if the rate of rise of voltage is very high i.e. if the voltage across the SCR increases within no time, a sufficient transient gate current will be produced which turns ON the SCR immediately.

This method of switching ON the SCR is called as rate effect and is not used in practice. However, due to spurious voltage spikes, there may be triggering of the SCR. Also if the charging current of the junction goes on increasing the thyristor may get damaged. Therefore the maximum allowable dV/dt rating given by the manufacturer should be checked and the device must be protected from high dV/dt.

Gate triggering is the most commonly used, reliable, and efficient method of turning ON the SCR or thyristor. In this method, the SCR is turned ON by applying a positive voltage between the gate and cathode terminals while the anode is made positive with respect to the cathode i.e., in the forward blocking mode. 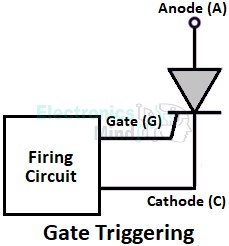 When a positive voltage signal is given to the gate in the forward biased condition, it injects electrons into P-layer and electrons become the majority charge carrier. Due to this depletion layer in junction J2 is diminished and it will break down.

As the other two junctions, J1 and J3 are already forward biased, the SCR starts conducting. The breakdown of the depletion layer will be at a voltage lower than the forward break-over voltage. The following points should be noted related to gate triggering.

The gate current or voltage applied to turn ON the SCR can be in three ways.

In this method, dc supply is used at the gate terminal with respect to the cathode for turning ON. The drawback of this method is due to the continuous gate signal applied the losses in the gate will be more.

When AC supply is used for triggering, the SCR can be tuned ON only during the positive half cycle since the gate is made negative with respect to the cathode during the negative half cycle. By changing the phase angle of the supply the triggering angle can be controlled.

The pulse triggering is the most appropriate and widely used method due to its reduced gate losses. In this method, the gate drive circuit produces a pulse or train of pulses. Since the signal applied is discontinuous the gate losses are reduced and also it is possible to control the thyristor conduction period.

Points To Be Remembered While Operating Thyristor :