The conversion of a fixed-voltage dc source into a variable-voltage dc source using a dc chopper is an efficient way compared to other methods due to its compact size, less maintenance, low cost, and smooth control.

A dc chopper or dc-to-dc converter uses power semiconductor devices (MOSFET, BJT, GTO, or thyristor) for the conversion of dc power from one level to another level. These power semiconductor devices will act as switches where it connects and disconnects the load from the source at regular intervals so that a chopped output voltage is obtained. Let us see the various types of dc choppers and their circuit configuration.

There are various types of choppers or dc-to-dc converters used in different types of applications. The below shows the classification of dc choppers,

A step-up chopper is a power electronic circuit that produces a higher voltage than the input voltage at the output side. It is similar to an ac step-up transformer that increases the voltage level of a dc source. The below figure illustrates the circuit arrangement of a step-up chopper. 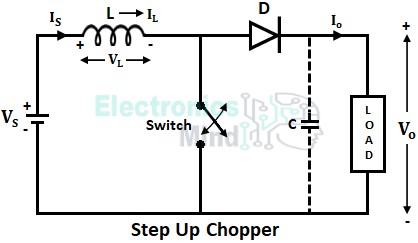 Thus load receives power from the source along with the inductor during the OFF period of the switch i.e., inductor voltage adds to the source voltage. In this manner by controlling the switch, a higher average voltage than the input voltage is obtained at the output side. 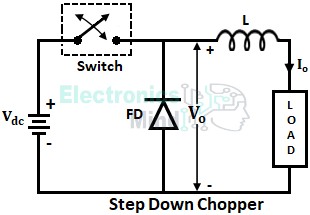 During the switch ON period, the source is connected to the load thus load voltage will be equal to the source voltage. When the switch is OFF, the load voltage becomes zero, and the load current will flow through the freewheeling diode (FD). In this manner, a chopped dc voltage is produced at the load side.

When the switch is ON, the load gets short-circuited through the switch, and thus load EMF stores energy in the inductor. When the switch is OFF, the charged inductor will start discharging in the reverse direction due to which the output voltage will be the sum of inductor voltage and load EMF. Thus diode gets forward biased and power flows from load to source.

In order to operate a class-C chopper in the first quadrant, switch S1 and diode D1 will be in operation. For the second quadrant operation, switch S2 and diode D2 perform the functions. In this chopper power can either flow from source to load or load to source.

A class-D chopper is also a two-quadrant chopper that can operate in the first and fourth quadrants of the output voltage and current diagram. In this chopper, the load voltage can be either positive or negative but the load current is always positive. The below shows the circuit topology of a class-D chopper.

In this chopper, both load current and voltage can be either positive or negative. A four-quadrant chopper can control the power flow and speed of a dc motor in either direction.

A voltage-commutated chopper is a type of chopper in which the thyristor which is used as a switching device is commutated by applying a reverse voltage with help of a capacitor. So that the thyristor is momentarily reverse-biased and gets turned OFF. 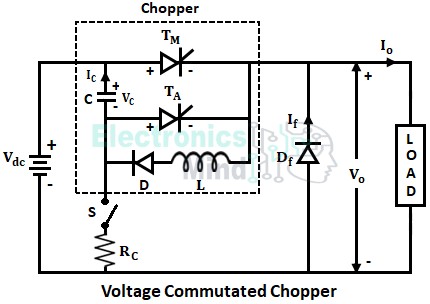 In a current commutated chopper, a reverse current is applied through the conducting thyristor so that the net current flowing through it becomes zero and gets turned OFF. The below shows the circuit diagram where thyristor TA, diodes D1 and D2, inductor L, and capacitor C form the commutation circuit. 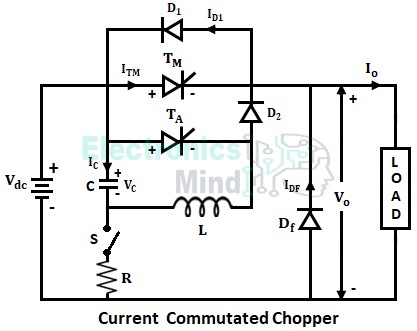 In load-commutated choppers commutation of the thyristor is done by reducing the load current to zero. The below shows the circuit which consists of four thyristors and one commutating capacitor. In the below circuit thyristors T1 and T2 form one pair and T3 and T4 forms another pair which conducts load current alternatively. 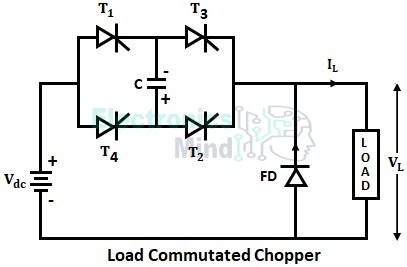