What is an IGBT?

IGBT is a voltage-controlled device similar to MOSFET with three terminals emitter, collector, and gate. It starts conducting current when a positive voltage across the gate and emitter terminals is applied. It offers high input impedance with low ON-state conduction loss. Let us see the construction and working of IGBT.

The below shows the construction of IGBT with three terminals emitter, collector, and gate which sometimes are also called the source, drain, and gate terminals respectively. The doping of each layer in IGBT is similar to layers of vertical MOSFET structure. 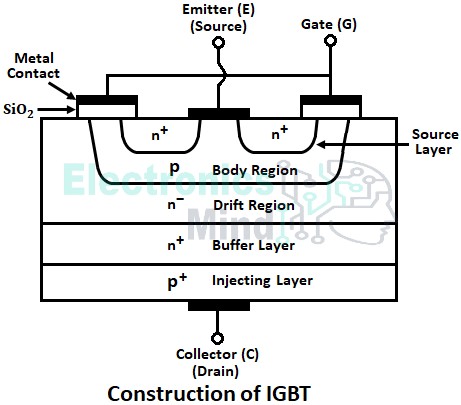 The main difference between the construction of IGBT and MOSFET is it has an additional p+ layer known as injecting layer which forms the collector of IGBT. This layer is heavily doped with an intensity of 1019 per cm3. 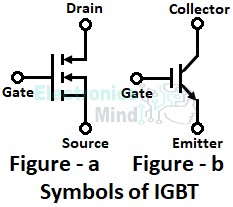 The figure-a above shows the symbol of IGBT which is the same as that of n-channel MOSFET with an arrow in the drain terminal representing injecting contact. The symbol in figure-b represents when IGBT is considered as the basic BJT with MOSFET gate input.

The n+ buffer present between the injecting and drift layers of IGBT is not essential for its operation. Depending upon the existence of the n+ layer, IGBTs are classified into two types,

The IGBTs without an n+ layer are called non-punch through or symmetric IGBTs. The IGBTs with an n+ layer are called punch-through or asymmetric IGBTs. Punch Through IGBTs are more popular they have faster turn OFF times and are well suited for inverter and chopper circuits. Non-punch Through IGBTs have symmetric voltage blocking capabilities, thus they are well suited for rectifier circuits.

The operation of IGBT is very similar to power MOSFET. When a positive voltage signal greater than the threshold value is applied to the gate terminal, electrons are drawn towards the gate terminal in the body region and attract holes from the p+ layer as shown below. This forms a conductive channel across the body region, allowing current to flow from the collector to the emitter. 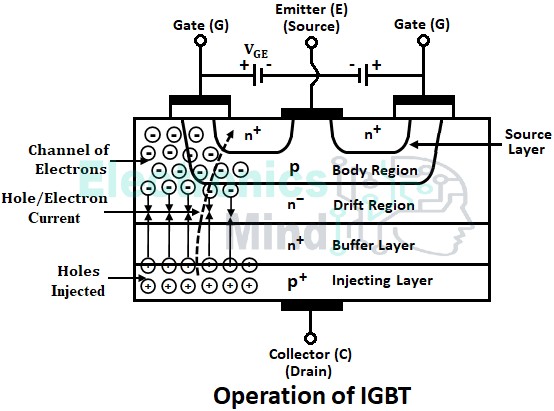 The below shows the equivalent circuit of IGBT which consists of equivalent MOSFET connected to a coupled NPN and PNP transistor pair which represents a parasitic thyristor structure. On applying a positive voltage signal at the gate terminal, the internal MOSFET turns ON due to which transistor T1 also triggers. 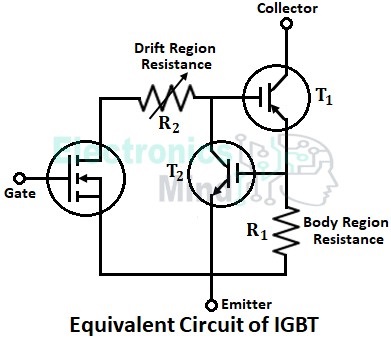 Since the base drive of T2 is connected to T1, T2 will also get turned ON by T1 forming a regenerative loop. Thus there will be a significant increase in the hole injection resulting in a reduction of ON-state voltage drop like BJT. 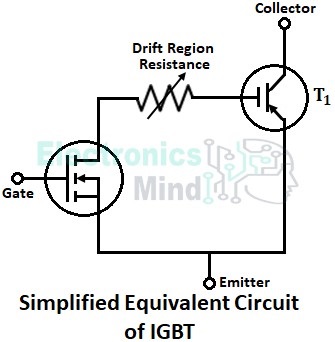 Due to the reduction of drift region resistance because of the p+ injecting layer. On the application of gate signal, the ON state losses are less in IGBT compared to MOSFET. If in case the body region resistance is significant, the drop due to it is sufficient to turn ON transistor T2. Due to this T1 also gets turned ON and forms a regenerative loop.

Under this condition, the gate loses its control over the operation of the IGBT, and a latch-up occurs. The IGBT remains in conduction even if the gate signal is removed, which can cause damage due to excessive power dissipation. This latchup of IGBT into ON-state can be avoided by designing the IGBT by optimizing the doping levels and geometry of the various layers.

The below shows the V-I characteristics of IGBT plotted for the collector or drain current IC with respect to collector-emitter voltage VCE. It should be noted that sometimes the emitter terminal is also known as the source terminal and the collector as the drain terminal. Since IGBT is a voltage-controlled device, a small voltage is enough across the gate and emitter terminals to turn ON.

In the above V-I characteristics, collector current IC is being controlled for different values of gate-emitter voltage VGE. When there is no voltage applied across the gate and emitter, there is no conduction of current (i.e., IC = 0) through IGBT and thus it will remain in OFF-state.

In order to turn ON the IGBT, the positive gate voltage applied should be greater than the threshold voltage VGE(th). Once a voltage greater than the threshold value is applied to the gate, the IGBT turns ON and the current IC starts following through it. The conduction of collector or drain current IC will increase with an increase in voltage VGE.

The VCE breakdown is the forward breakdown voltage above which the current and voltage through the device will high resulting in huge power dissipation. This will cause damage to the device, thus it is important to operate the device below this voltage.

The advantages of IGBT are,

The disadvantages of IGBT are,

Some of the applications of IGBT are,