So, for the output frequency to be controlled, we need to have the dual apparatus, but with the “cyclo converters”, we can wipe out the need for the dual apparatus. Moreover, with the use of the cycloconverters, all the lower-order harmonics are reduced to zero.

Step-up cycloconverters are the converters in which the output frequency obtained is greater than the input supply frequency. The circuit diagram of a single-phase midpoint type step up cycloconverter is shown in the below figure. 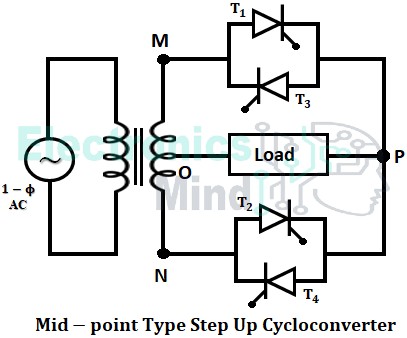 A mid-point cycloconverter uses a single-phase transformer whose secondary winding is tapped at the center. The load is connected between points O and P. The thyristors are triggered depending upon the polarities of points M and N of the transformer.

When the supply is given to the single-phase mid-point cycloconverter, point M is positive with respect to point O. For the positive half cycle, thyristor T1 is triggered from 0 to t1, thus the obtained output voltage is positive. At the instant t1, the thyristor T1 is forced commutated and thyristor T4 is turned ON so that the load voltage becomes negative as shown in the below waveforms. 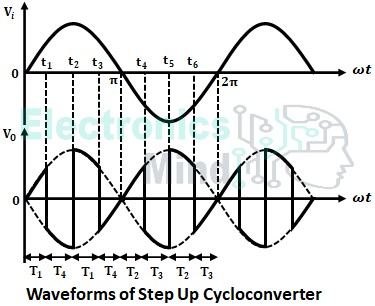 The below shows the circuit of single-phase to single-phase bridge-type configuration step down cycloconverter. 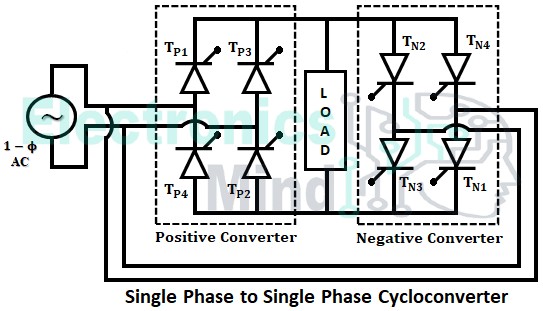 It should ensure that two converter circuits should not be in conduction at the same time, otherwise a short circuit will take place at the input terminals. The below output voltage waveform shows the converter operation when the input frequency is reduced to ½ and ¼ at the output terminals. 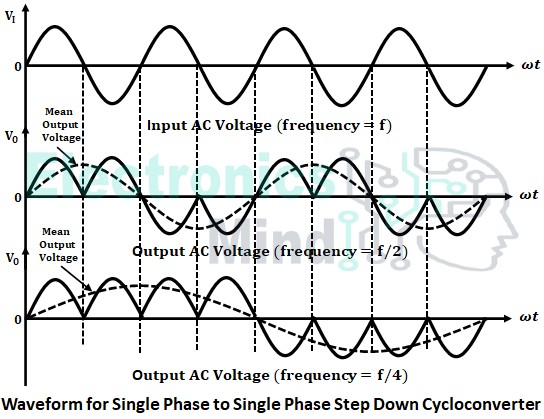 This cycloconverter is also known as a three pulse three-phase to three-phase cycloconverter. The firing arrangements for thyristors for phase groups 2 and 3 lag by 120° and 240° respectively as that of group 1. By varying the firing angle, the average output voltage obtained is varied and by varying the firing sequence of the thyristors, the frequency of the output voltage can be varied.