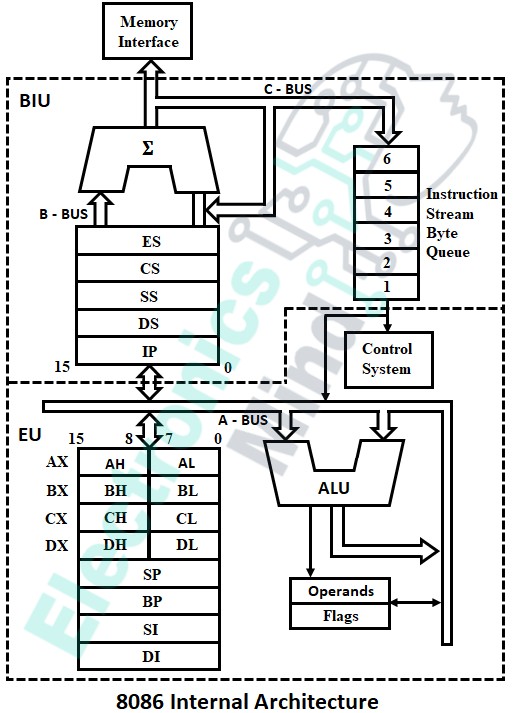 The bus interface unit interfaces 8086 with the external world. It handles all the data transfer functions. The BIU performs read and write operations on data in the memory and on the external devices connected to the ports of the microprocessor, and it also sends out addresses. That means all external operations are performed by BIU. To perform these operations BIU contains some functional parts, they are, 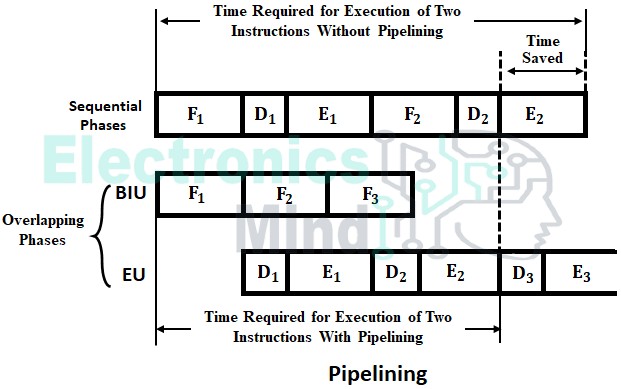 The 8086 microprocessor has 1 MegaByte (220 bits = 1 Mb) of segmentized memory divided into 16 logical segments. The maximum size of each segment is 64kb so that any location within the segment can be accessed with a 16-bit logical address. At any given time, 8086 works with only four 64kb segments which are independent and separately addressable units. Each segment is associated with segment registers that are 16 bits wide. The four registers related to four segments are,

Since, the two operations i.e., fetching an instruction from code memory by bus interface unit and execution of the instruction by execution unit are performed simultaneously, it is called parallel processing.

The A-Bus, B-Bus, and C-Bus are the internal buses of the 8086 processor. It is known that the BIU is responsible for the transfer of instructions, addresses, and data on the system bus to the execution unit, it performs these functions through C-Bus. The B-bus is used to perform instruction fetch, data fetch, address transfer, and computations of the effective address of the memory and the A-Bus is an interface between BIU and EU.

Why 8086 Internal Architecture is Divided into EU and BIU?

In general, almost all early 8-bit CPUs used the approach of “fetch-fetch-fetch-execute-fetch-fetch-fetch-fetch” while running a program from code memory. During the time that instruction is fetched, the CPU will be in the waiting state. In order to eliminate this CPU waiting state and to increase the execution speed, the 8086 processor is composed of two sections or units that operate asynchronously.

So there are two independent units i.e., BIU and EU, in the 8086 microprocessor. The BIU fetches instructions from code memory whenever the memory is free. The BIU gets instructions bytes and shifts them into the internal memory called instruction queue or pipeline. The EU gets the instructions out of the queue and executes them as fast as it can.

The BIU puts instructions in one end of the pipeline and the EU takes them out at the other end of the pipeline. Thus, BIU-EU combination can fetch and execute code simultaneously. Hence, to increase the execution speed of the processor, 8086 architecture is divided into BIU and EU.