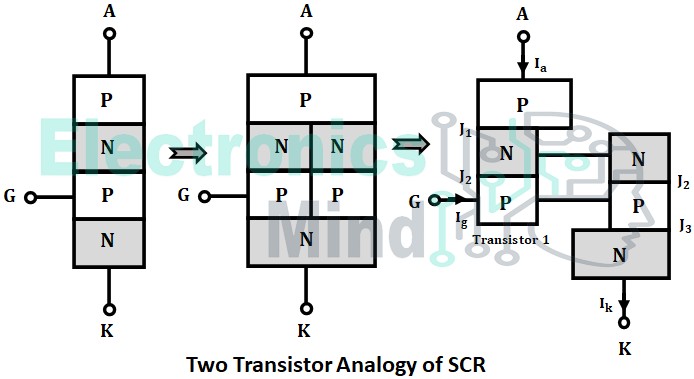 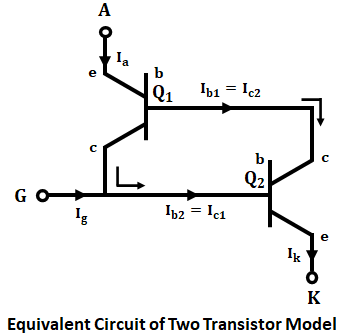 From the above equivalent circuit, the base and collector currents of the transistors Q1 and Q2 can be written as,
Ib1 = Ic2 and Ic1 = Ib2 …(1)

Also, from the above figure, we have, cathode current is the sum of anode current and gate current.

We know that, collector current Ic is related to emitter current Ie as,

Hence, in the given equivalent circuit,

The sum of two collector currents is equal to an anode current. Therefore,

Substituting equation 4 in equation 5, we get,

Substituting equation 2 in equation 6, we get,

If the leakage currents Icbo1 and Icbo2 of transistors Q1 and Q2 are negligibly small, then,

From the above equation, it can be analyzed that, if α1 + α1 = 1, then anode current Ia becomes infinity and hence thyristor enters into conduction state from non-conduction state. In other words, if Ig reaches a value such that α1 + α2 = 1, then SCR is turned ON and this action is called the Regenerative action.

The regenerative action i.e., the condition α1 + α1 = 1 can be obtained in the following ways,