The single-phase to single-phase bridge-type cycloconverter is made using two single-phase fully-controlled converter circuits, bridge-I, and bridge-II as shown below. The two bridges are connected to the load in such a way that, they are in an anti-parallel connection. Also, the two bridges should not conduct at the same time, otherwise, a shortcircuit is produced at the input. 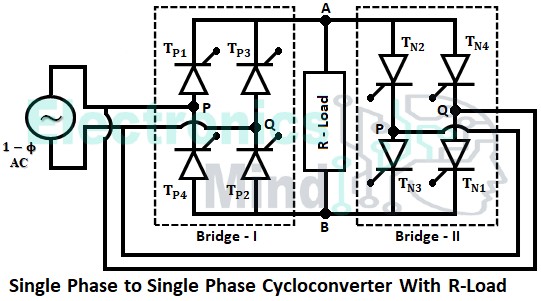 During the positive half cycle of the supply voltage, thyristors TP1, and TP2 are forward biased. At instant ωt = α, TP1 and TP2 are triggered and they start conducting current. Now, the load voltage is positive, with point A as positive and point B as negative, and the load current flows through the path,

At ωt = π, the negative half cycle of the supply voltage appears due to which thyristors TP1 and TP2 are turned OFF, and both the load voltage and load current become zero as shown in the waveform below.

Even in this period also the load current and load voltage are positive similar to when the thyristors TP1 and TP2 are in conduction as shown in the below figure. 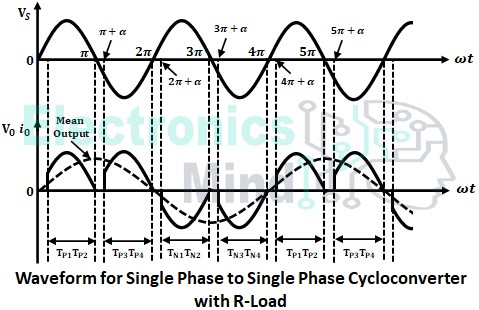 From ωt = 3π, thyristors TN3 and TN4 will conduct. Hence, the load current and load voltage become negative for alternate cycles of input supply and it indicates that the input frequency is reduced to (1/2) at the output terminals.

Suppose, if the load is inductive, the current through the SCR will not be reversed at the instant of line-voltage reversal and continues to flow even after it. This is due to the effect of load inductance since an inductor doesn’t allow the sudden change in current. Let us see the operation of a single-phase to single-phase converter with RL load.

The below shows the waveforms when the cycloconverter supplies power to an inductive load. We have seen that with resistive load, at ωt = π, the load voltage and current become zero and the negative half cycle of the supply voltage appears which makes thyristors TP1 and TP2 turn OFF. 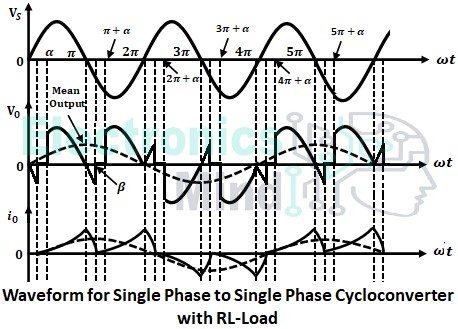 Hence, it can be concluded that two positive and two negative half cycles of the input are combined to produce one positive and one negative half cycle at the output i.e., stepping down the frequency to (1/2)nd of the input frequency. Similarly, there are other step-down cycloconverters that convert the input frequency to (1/3)rd, (1/4)th, etc, at the output terminals depending upon the requirement by the load.