The circuit diagram for a single-phase half-wave controlled rectifier with resistive load is shown below. The circuit is energized from transformer secondary and an SCR is included between load and secondary. The ac input is given to the primary of the transformer. In the below circuit load is assumed to be purely resistive. 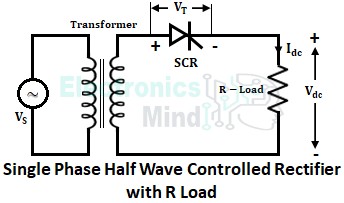 Working of Single-phase Half Wave Controlled Rectifier with R Load :

We know that thyristor is a unidirectional device, allowing the flow of current only in one direction. When the thyristor is forward-biased i.e., anode terminal is positive with respect to the cathode terminal, and the gate terminal is not triggered, there will be no conduction due to the reverse biasing of the inner junction of SCR. Hence, the entire supply voltage appears across the SCR.

If the gate terminal of SCR is triggered with an adequate duration pulse, then the width of the depletion layer (reverse biased inner junction) starts reducing and finally disappears and SCR starts conducting. As soon as the conduction starts, the voltage across SCR drops to a very small value and the supply voltage appears across the load.

The magnitude of the conduction current depends upon the instant when it is triggered i.e., firing angle ‘α’, and the load resistance R. Since the circuit does not contain any energy storing elements, the load current will be in phase with voltage and becomes zero instantaneously with the voltage at zero crossing (at ωt = π rad/sec).

During the negative half cycle of supply voltage, the SCR is reverse-biased, so there will be no conduction even if the gate is triggered. Hence, the entire supply voltage appears across SCR. The waveforms for the above circuit operation with resistive load are illustrated below. 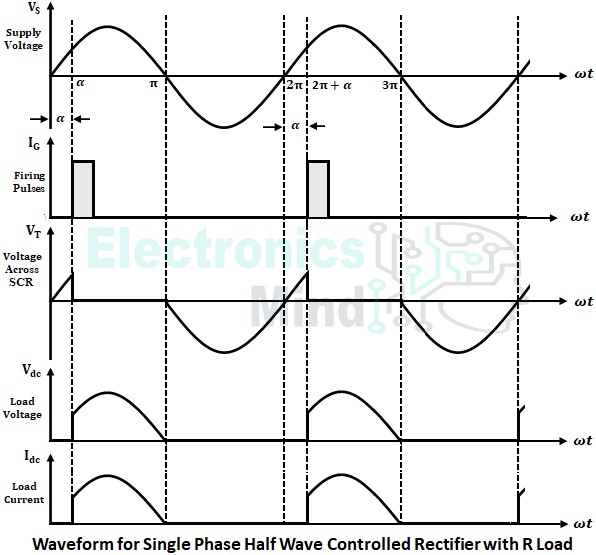 In the above waveforms, the load current and voltage are zero from 0 to α. When SCR is triggered by giving gate signal at α. The entire supply voltage except for drop across SCR will be applied across the load (from ωt = α to ωt = π). At ωt = π, the phase reversal takes place and the negative half-cycle of the input supply will start.

Due to the negative half-cycle, the SCR will be reverse biased and will be turned OFF at ωt = π. From ωt = π to ωt = 2π, the load current and voltage will be zero. Again when the positive half cycle starts i.e., from ωt = 2π, SCR will be forward biased but it will not be switched ON until it is triggered i.e. until ωt = (2π + α).

Calculation of Average Load Voltage and Current with R load :

From the above waveform, the load voltage appears only from α to π in the period of 2π during the first cycle of the input supply. From this, the average value of load voltage and the load current is derived as, 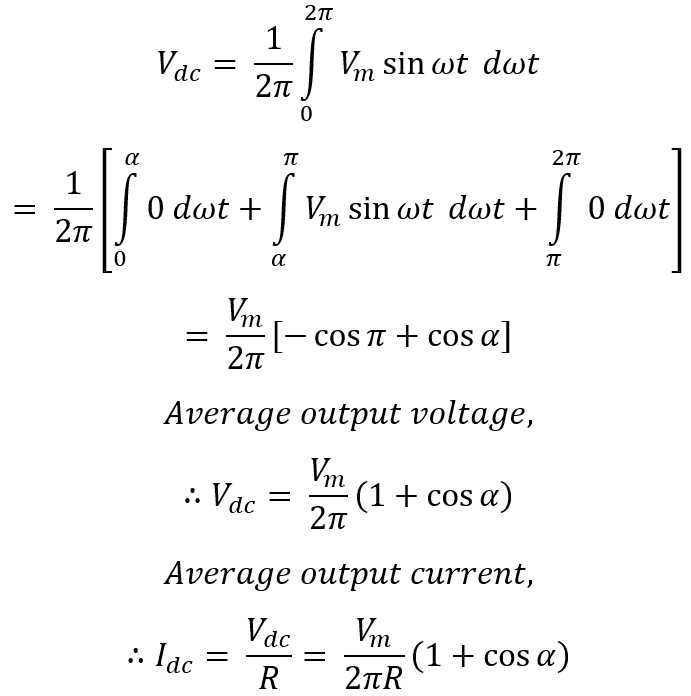 When the load is complex i.e., when the load contains any energy storage elements like inductor (RL load), the situation becomes different from that of pure resistive load. Here the load current doesn’t follow the waveform of the load voltage (load current will be out of phase with load voltage). The below figure illustrates the half-wave rectifier with RL (resistive-inductive) load. 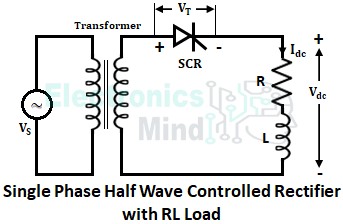 Working of Single-phase Half Wave Controlled Rectifier with RL Load :

At ωt = α, when SCR is triggered, it starts conducting. Now, the SCR acts as a closed switch due to which the voltage across SCR decreases and becomes equal to ON state drop. The load voltage will now become equal to the supply voltage; whereas, the load current increases at a slow rate because of the presence of an inductor. 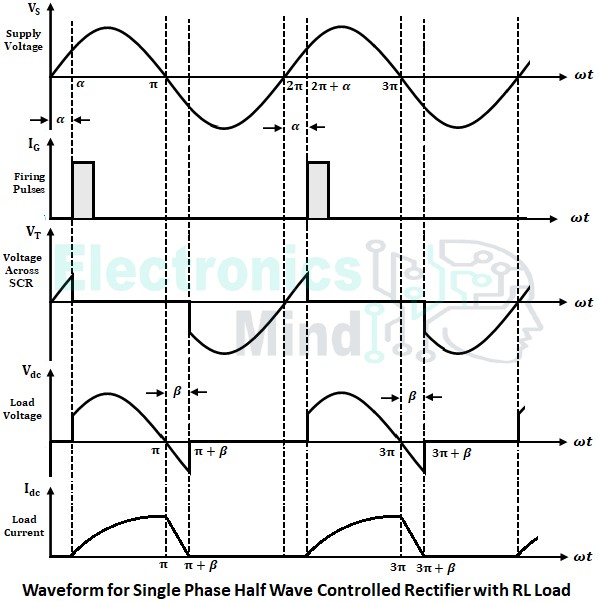 Calculation of Average Load Voltage and Current with RL load :

The average value of load voltage and load current when half-wave controlled rectifier supplying power to an inductive load is derived as, 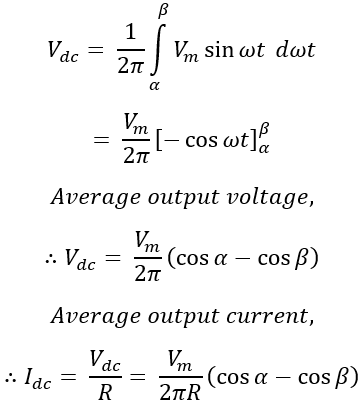 Working of Single-phase Half Wave Controlled Rectifier with Freewheeling Diode :

From the above rectifier operation with inductive load. We notice that, the load inductor stores energy in the initial part of the positive half-cycle of the applied voltage and maintains the conduction of current during the negative half-cycle by releasing the stored energy for a substantial period. 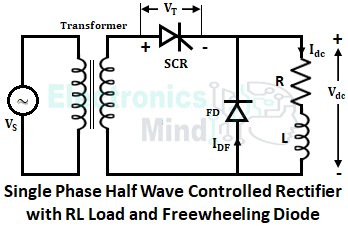 By using a free-wheeling diode only positive voltage reaches the load. If the circuit is connected to the ac supply, the diode or power device is likely to damage when the switch is closed and opened due to sparks established. To overcome this situation a freewheel diode must be connected across the load. 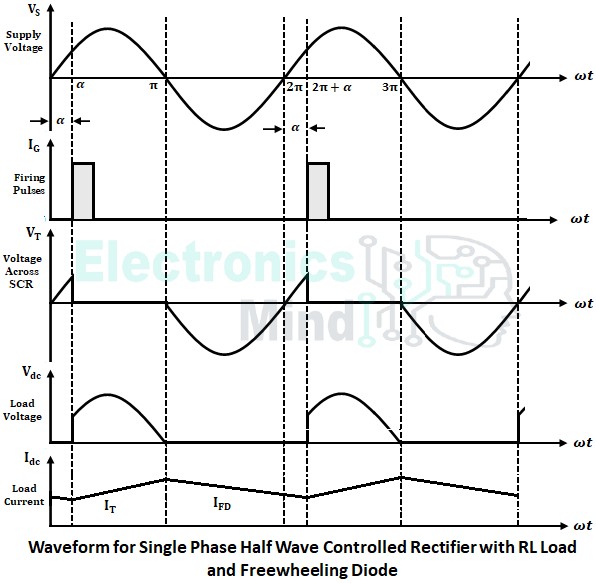 In practice, half-wave controlled rectifiers are not generally used, since they cannot produce continuous load current and a large ripple will be present in the output voltage.