During the overlapping period, the rate of rise of load current through the thyristors being turned ON will be equal to the rate of fall of current in the thyristors being turned OFF, this results in the short circuit across the source terminals. Hence, the output voltage becomes zero during the overlap period and this period remains for a duration μ called as overlap angle or commutation angle. 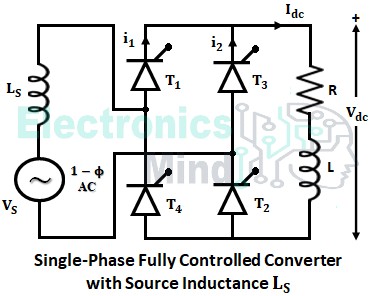 We know that an inductor does not allow sudden changes in current. Thus due to source inductance LS, the fall of i2 and rise of i1 will not be instantaneous rather it is gradual. Hence, there will be a small period during which both the currents i1 and i2 will flow in the circuit, resulting in a short circuit across the source terminals. This period is called as Overlapping Period. 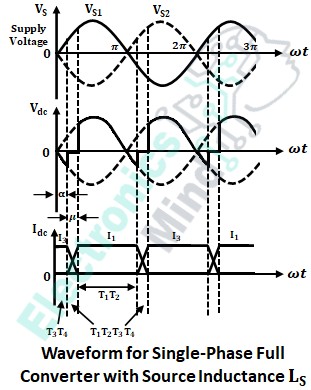 During this period, the output voltage will be zero. The above shows the typical waveform of voltage and current of the converter with source inductance LS. At ωt = π, as the supply voltage is negative the thyristors T1 and T2 should be turned off, and hence i1 should be zero.

But due to the presence of source inductance, the current i1 will not go to zero at ωt = π, rather starts decreasing gradually towards zero. Due to this, the output voltage Vdc will become negative for a small period till the incoming SCRs are triggered.

Below shows the equivalent circuit for a the above bridge converter circuit. 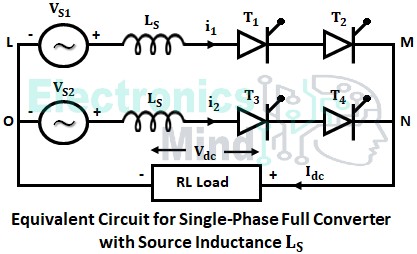 Applying KVL to the loop LMNOL, 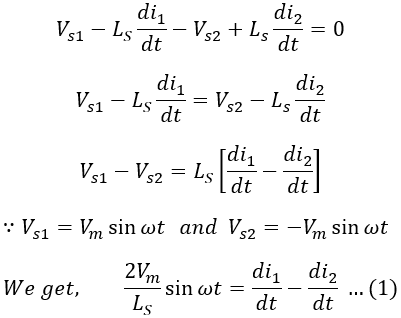 Since the load current is constant, 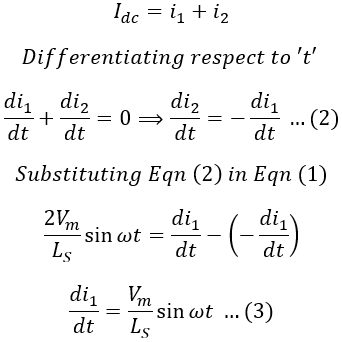 At the instant ωt = α, load current i1 through T1 and T2 builds up from 0 to Idc during the overlap angle μ.

Integrating equation (3) we get, 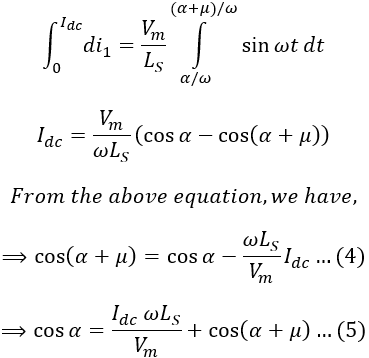 From the waveform, we have,

By using equation (7), a dc equivalent circuit for a single-phase full converter is given as,

Therefore, the effect of source inductance on a single-phase full converter is such that, until the overlap angle lies below π, the output voltage will be equal to a value shown in equation (6). If μ = π, both incoming and outgoing thyristors will remain in the conduction state, thereby making the output voltage zero.