Silicon Controlled Rectifier (SCR) is the most widely used semiconductor device belonging to the thyristor family made up of four alternate defused layers of P-type and N-type silicon. It has three junctions (J1, J2, and J3) and three terminals (anode, cathode, and gate) with a gate terminal provided at the P layer near the cathode as shown below. 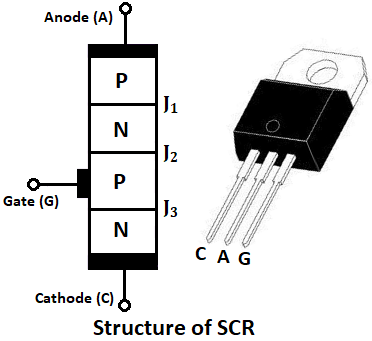 When the anode is connected to the positive terminal and the cathode to the negative terminal with the gate terminal open, the junctions J1 and J3 are forward biased while J2 is reverse biased. In this condition, there will be no conduction of current through SCR except a small leakage current and thus SCR will be in OFF-state known as Forward Blocking State.

The SCR can be turned ON by two methods either by increasing the forward voltage to a sufficiently larger value in the above case due to which reverse-biased junction J2 will break down or by applying a positive voltage at the gate terminal.

LASCR (light-activated SCR) is also a type of thyristor made up of semiconductor material that turns ON when light radiations fall on it. LASCR is almost similar to SCR except it will turn ON only when exposed to sunlight. 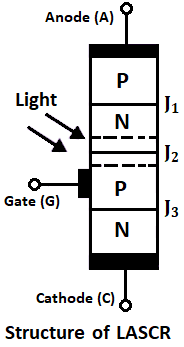 Once the LASCR is triggered, it starts conducting current and behaves as the normal SCR. The LASCR will remain in the conduction state even if it is removed from light and gets turned OFF only when the anode current becomes less than the holding current.

The applications of LASCR are HVDC transmission, static reactive power or VAR compensation, etc, where there is a requirement of high voltage and high current. It provides excellent isolation between the light-triggering source and converter circuit, which floats at a potential of as high as a few hundred kilovolts. The voltage rating of a LASCR could be as high as 4 kV at 1500 A with light-triggering power of less than 100 mW.

Difference Between SCR and LASCR :