An IGBT is a new development in power semiconductor devices that possess the advantages of both MOSFET and BJT. It is a voltage-controlled bipolar device that has emitter-collector characteristics of BJT and control features of MOSFET. The below shows the structure of IGBT which consists of four alternate p-n-p-n layers with three terminals source or emitter, drain or collector, and gate. 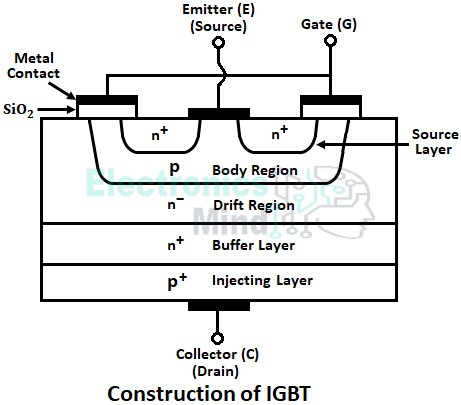 When a positive voltage signal more than the threshold value is applied across the gate and emitter, IGBT is turned ON. Once the gate voltage is removed the IGBT gets turned OFF. Thus the gate terminal has full control over the operation of the IGBT.

Since IGBT exhibits emitter-collector characteristics of BJT, the ON-state voltage drop of IGBT will be very low similar to BJT. It has high input impedance and a simple gate drive circuit similar to MOSFET. Due to their ruggedness, capability, peak current, and ease of gate drive IGBTs become the most favored power semiconductor device in many applications.

In order to turn ON the MOSFET, a gate signal is to be applied across the gate-source terminals. Since the MOSFET is a voltage-controlled device, it requires only a small input current, and the flow of current between its source and drain terminals is controlled by the positive voltage signal applied to the gate terminal.

However, MOSFETs are sensitive to electrostatic discharge and are difficult to protect under short-circuit conditions. Also due to the high ON-state resistance of MOSFET, the conduction losses are high compared to IGBT, hence they are used for low-power applications.

Comparison Between IGBT and MOSFET :

key Differences Between IGBT and MOSFET :