di/dt Rating of an SCR :

When a thyristor is switched ON by applying a positive gate signal, the conduction begins at the location which is near the gate. After a fraction of second, the conduction area increases, and its spreads throughout the junction completely.

Now, if the rise of anode current (di/dt) is higher when compared with the spreading velocity of carriers across the cathode junction, then it leads to the formation of hot spots near the gate connection. This occurs due to the high current density in the junction region. The formation of hot spots increases the junction temperature of SCR beyond the maximum permissible limit. As a result, SCR suffers from a permanent failure. 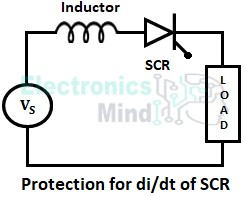 dv/dt Rating of an SCR :

If the rate of rise of forward anode voltage exceeds the specified maximum limit, then it causes switching from OFF state to ON state. It can also be said that if dv/dt increases beyond the specified value, then it leads to false triggering of SCR which is undesired.

The increase in the forward dv/dt can be explained by means of an internal capacitance to be acting inside on SCR. Upon increasing the voltage across the anode and cathode of the SCR, there will be a flow of charges similar to the charging current of a capacitor [ic = C(dv/dt)]. 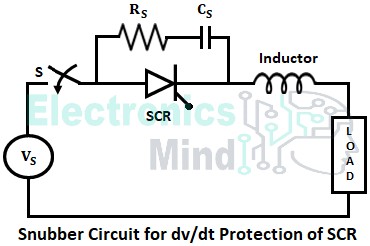 The dv/dt rating of an SCR has an inverse relation with its junction temperature. The higher the junction temperature, the lower will be the dv/dt. In practice, dv/dt triggering is never employed because it leads to random and false triggering. Snubber circuits are arranged across each SCR to limit the maximum dv/dt applied to an SCR as shown in the above figure.