The below figure shows the circuit configuration of a Class-E or Four-Quadrant Chopper. A class-E chopper circuit is formed by the parallel combination of two class-C chopper circuits. The circuit consists of four switches (S1, S2, S3, and S4) and four diodes (D1, D2, D3, and D4).

The switches used are power semiconductor devices mostly transistors (IGBT, MOSFET, or BJT). The transistors are turned ON and OFF by using pulse width modulation signals. Let us see the working of a class-E chopper with RL (resistance and inductance) load.

When S1 and S4 are ON, the load inductor stores energy. Then after switch S1 is turned OFF and now the load current due to inductance starts free wheeling through S4 and diode D2 as shown in figure-2.

Hence we can see that initially when switches S1 and S4 are ON, the output current Io and voltage Vo will be positive. Also during the discharge period of the load inductor, the load current and voltage remain positive. Thus a first quadrant operation of a class-E chopper is obtained. In the first quadrant operation power always flows from source to load and the circuit operates as a step-down chopper.

In the second quadrant operation of a class-E chopper, the load will act as the dc source (generator). Here switch S2 is operated while keeping other switches OFF. When switch S2 is turned ON load EMF E, drives current through the load, S2, D4, and back to E as shown in figure-1 below.

During the conduction of current through S2 and D4, the load EMF stores energy in the inductor L. Now when the switch S2 is turned OFF, the charged inductor starts discharging along with the load EMF (i.e., E + Ldi/dt) through D1, source, and D4 as shown in figure-2 above.

Thus we can see that, the average output current Io is negative due to flow in the reverse direction, and since (E + Ldi/dt) is more than the source voltage, the average output voltage Vo remains positive. Hence a second quadrant operation of a class-E chopper is obtained. Since the load supplies current, power flows from load to source in the second quadrant operation.

For the third quadrant operation of a class-E chopper, load voltage and current should be negative. In order to operate a class-E chopper in the third quadrant, the polarity of load emf E must be reversed. Now the switches S2 and S3 are turned ON connecting the load across the source. When S2 and S3 are ON, load current flows from source to S2, load, S3, and back to source as shown below in figure-1.

During the interval when S2 and S3 are ON, the inductor stores energy and output voltage Vo = -Vs. After a certain time, switch S3 is turned OFF, and thus load gets disconnected from the source. Now inductor starts releasing its stored energy through S2 and D4 as shown above in figure-2.

During the conduction of S4 and D2 load inductor is charged. Once the switch S4 is turned OFF, the inductor starts discharging and current is fed back to the source through D4, source, and D2.

Hence, when S4 is ON output current Io is positive and output voltage Vo will be zero. Whereas when S4 is OFF output current Io will be still positive but output voltage Vo = -Vs (i.e., Vo is negative). Therefore, Io will be positive and Vo will be negative which leads to a fourth quadrant operation of the chopper. Similar to the second quadrant, power flows from load to source in the fourth quadrant operation.

The below figure illustrates the characteristics of the class-E chopper in four quadrants. 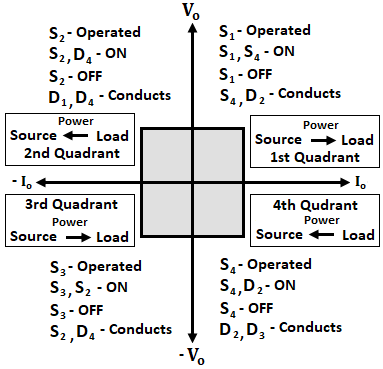 A class-E chopper is used for a reversible regenerative dc motor drive where it can reverse the direction of rotation and breaking in either direction.

The third quadrant operation is called reverse motoring mode where the motor direction of rotation is reversed due to negative output voltage and current. In the fourth quadrant, the motor operates in a reverse braking mode where it acts as the generator supplying power back to the mains.

From the above-discussed circuit diagram and operation of class-E, we can conclude that,