In class A and class B commutation methods discussed in the earlier articles, there is only one SCR used, coming to the class-c commutation method there will be two SCRs. One SCR acts as the main thyristor and the other as the auxiliary. It is a type of forced commutation technique that uses additional external components in the circuit for the commutation of the thyristor.

In this method of commutation, a reverse voltage is applied across the thyristor by discharging a capacitor such that it creates reverse bias and helps in commutating the thyristor. Let us see the circuit design and working of class-C or complementary commutation of thyristor or SCR. 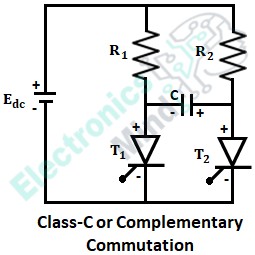 Initially, the main thyristor T1, as well as the complementary thyristor T2, are in the OFF state and the voltage across the capacitor, EC is zero. In mode-1, the condition of T1, T2, and capacitor can be represented as,

At ωt = t0, main thyristor T1 is triggered due to which the load current starts flowing and also the capacitor C starts charging with the polarities as shown in the figure above. The load current flows through the path,

And the charging capacitor current flows through the path,

In this mode the capacitor is fully charged to the supply voltage i.e., it continues to charge until it gains a voltage equal to the input voltage Edc. Thus the condition of T1, T2, and capacitor in mode-2 will be changed and is represented as,

At ωt = t1, thyristor T2 is triggered and it starts conducting. The main thyristor T1 turns OFF immediately after triggering the complementary thyristor T2 since it will be reverse biased.

When the thyristor T2 is triggered, the negative polarity of the capacitor C is applied across the anode of T1 and the positive polarity of capacitor C is applied across the cathode of T1. This causes to reverse bias the T1 and thus, thyristor T2 will conduct and T1 will be turned OFF i.e., commutation of T1 is done by turning ON T2.

Now, the capacitor charges to a voltage equal to -Edc (from t1 to t2) through the load which will be in reverse polarity. The charging path of capacitor C is,
Edc → R1 → C → T2 → Edc

At the end of mode-3, the state of T1, T2 and capacitor becomes,

At ωt = t3, thyristor T1 is again triggered and it starts conducting. Immediately, thyristor T2 gets commutated since it gets reverse bias voltage due to discharge of capacitor in the reverse direction. Again the capacitor starts to charge as in the case mode-2 and the process continues. By the end of this mode, the condition of T1, T2, and capacitor is represented as,

Waveform of Class-C or Complementary Commutation :

This type of commutation is very useful for frequencies less than 1000 Hz. The waveforms for complementary impulse commutation are shown in the below figure. 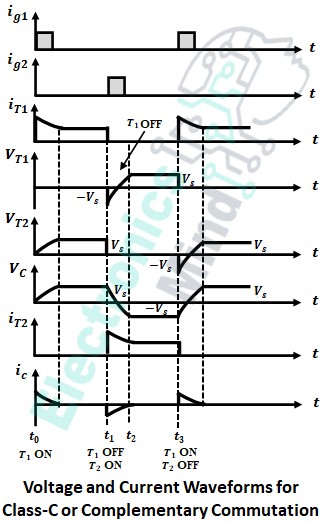 Now in order to turn-OFF T1, thyristor T2 is triggered at t2 by applying pulse ig2. When T2 turns ON, current iT2 flows and voltage VT2 becomes zero. Due to this, capacitor voltage makes the thyristor T1 reverse bais (from t1 to t2) and thus T1 gets turned OFF. At this condition the supply voltage appears across T1 as VT1, current iT1 becomes zero and the capacitor will charge in reverse direction i.e., to -Vs from t1 to t3.

To find the current through and the voltage across commutating capacitor, applying KVL to the closed-loop of the capacitor at instant ωt = t1, i.e., for loop Edc → R1 → C → T2 → Edc. 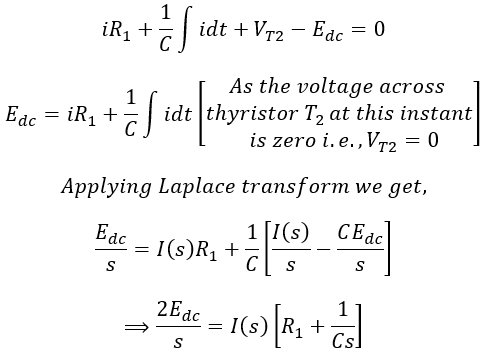 Now, applying Inverse Laplace transform for the above equation, we get, 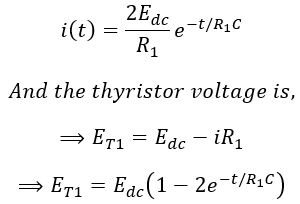 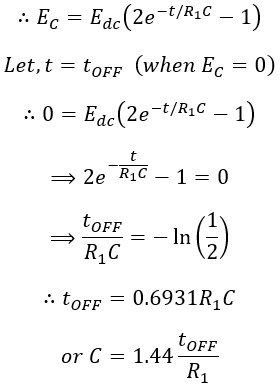 The maximum permissible dV/dt across thyristor T1 using commutation components is given by (dV/dt)max > 2V/RLC. Since the commutation of SCR in this method is due to the application of reverse voltage, the class-C commutation is also known as Voltage Commutation. The single-phase inverter circuit that employs centre-tapped transformer uses the class-C method of commutation of SCR.