The class-B commutation of the thyristor is also called Resonant Pulse Commutation. It is a type of forced commutation technique that uses a charged capacitor to create a reverse current through the thyristor. So the net current flowing through it will become zero and it gets turned OFF.

The below shows the circuit for class-B commutation or resonant pulse commutation of SCR or thyristor. The circuit incorporates a thyristor and LC resonating circuit connected in parallel with the thyristor. 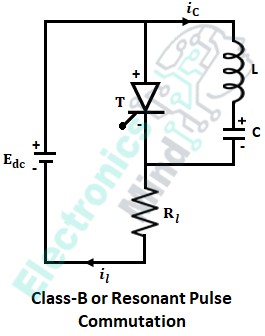 Let us see the working of class-B commutation in four modes of operation.

Initially, when the supply is given to the circuit from source Edc, capacitor C gets charged with the polarities as shown in the figure above. The capacitor continues to charge to a voltage equal to slightly greater than the input voltage Edc. Till now the thyristor T will be in the OFF state. The path of the charging current of the capacitor is given as,

Now at ωt = t1, after the complete discharge of the capacitor, the polarities of the capacitor get reversed with respect to the polarities shown in the above figure. Because of this, a reverse voltage of capacitor C will appear across the thyristor T. There is a resonating current developed, which is now in the reverse direction and this resonating current flows through the path,

After the commutation of thyristor, T capacitor C will again charge to voltage slightly greater than the input voltage Edc. Again, when the thyristor T is triggered at the next instant, the same process continues. Here we can notice that, after triggering the thyristor T, it is commutated by itself. Therefore, class-B commutation is also called Self-commutation.

The below shows the waveform of class-B or resonant pulse commutation. 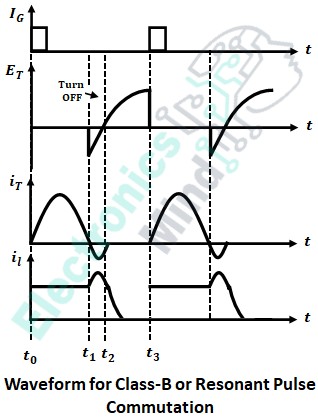 In the above waveform, IG represents the thyristor gate triggering pules, ET and iT are the voltage drop and current flow of the thyristor respectively and il is the load current.

The capacitor starts discharging with reverse polarity, and at an instant when iC becomes higher than the iL. The thyristor gets turned-OFF which is represented from time t1 to t2, due to this the load current decreases and becomes zero after t2. Once the thyristor gets OFF, the supply voltage will appear across the thyristor. Again when the gate pulse is applied the thyristor starts conducting and the same process continues.

Applying KVL to the LC circuit loop, we get, 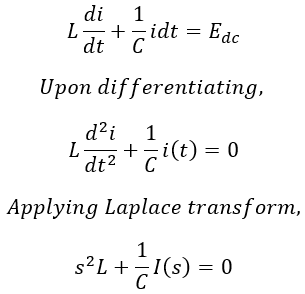 By solving the above equation, the instantaneous value of the increasing resonant current is given by, 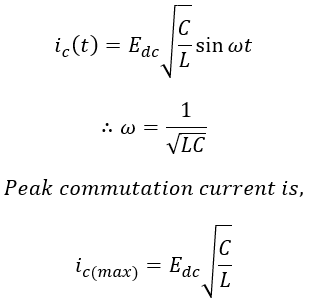 In this commutation method, the thyristor takes a time approximately equal to the one-quarter period of the resonant circuit to reverse bias. Hence, the turn-oFF time of the thyristor is given by,