In a class-A chopper, the power always flows from source to load unlike class-C and class-E choppers where reversal of power is possible. A class-A chopper is also called first quadrant chopper or step-down chopper.

The below figure illustrates the basic power circuit of a class-A chopper. The circuit consists of a static switch which is basically a power semiconductor device i.e., a transistor or a thyristor. In the case of RL loads, a freewheeling diode (FD) is connected across the load to provide a path for energy dissipation stored in load inductance.

The operation of a class-A chopper can be done by opening and closing the switch at regular intervals of the period. When the switch is closed, the load is connected across the dc source. Thus the voltage across the load becomes equal to the source voltage (i.e., Vo = Vdc), and the current Io flow from source to load charging the inductor with the polarity shown below. 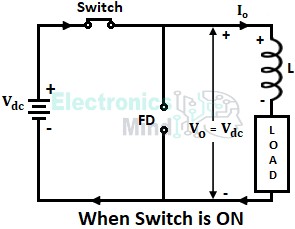 Now when the switch is opened, the load gets disconnected from the source due to which the output voltage Vo becomes zero, and the load current Io stops flowing in the circuit. But at the same time, the inductance present in the load doesn’t accept this sudden drop in the load current and hence it tries to make the load current continue by inducing a voltage with reverse polarity. 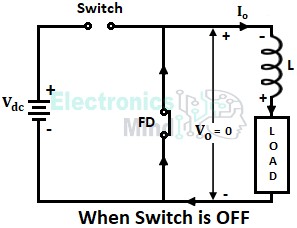 Therefore, it can be seen that during both the ON and OFF periods of the switch, the flow of load current Io remains in the same direction. It is thus seen that the average values of both output voltage Vo and output current Io are always positive. Hence a class-A chopper always operates in the first quadrant of the Vo-Io plane. 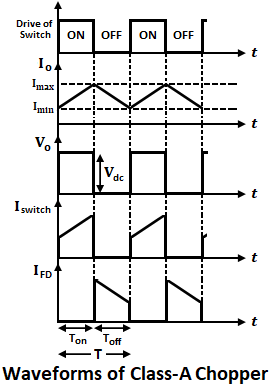 In the above waveforms, it can be seen that, during the turn-ON (TON) period of the switch, the output voltage Vo becomes equal to Vdc and the output current Io gradually increases to the maximum value. During the turn-OFF (TOFF) period of the switch, Vo becomes zero due to the disconnection of the source, and output current Io gradually decays to zero through the diode.

Since a class-A chopper will act as a step-down chopper and there is no possibility of changing the direction of the output voltage or current, it is used to control the speed of a dc motor in one direction.